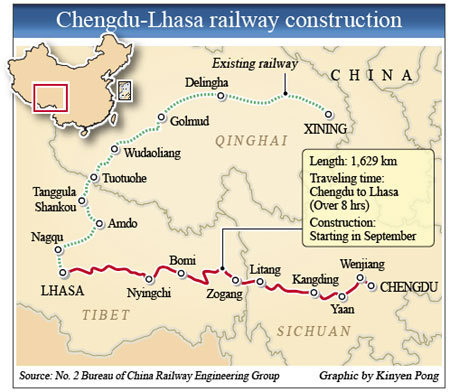 (TibetanReview.net, Feb18, 2017) – China said Feb 17 that it had speeded up since the beginning of this year the construction of the Sichuan-Tibet railway, its second railway connection to Tibet’s capital Lhasa after the Qinghai-Tibet Railway which opened in 2006.

Describing the 1,900-kilometer “second sky road” as a “giant rollercoaster”, China’s official chinadaily.com.cn Feb 17 said the railway, when completed, will descend more than 3,000 meters in altitude from the high Tibetan Plateau, passing through a variety of different terrains before finally arriving in Chengdu, capital of its Sichuan province.

The report said that since the beginning of this year, construction of the section of this railway line running from Chengdu to the city of Ya’an in western Sichuan had been in full swing, with some 26 bridges and seven tunnels being built.

The report said that workers constructing the Jin Jiguan No 2 Tunnel, a 1,739-meter tunnel passing through the Jin Jiguan mountain in Ya’an city, were working a 24-hour work schedule in shifts to complete it by the tight deadline of Mar 2017.

China said in previous media reports that the building of this 216 billion yuan project will be completed by 2025.