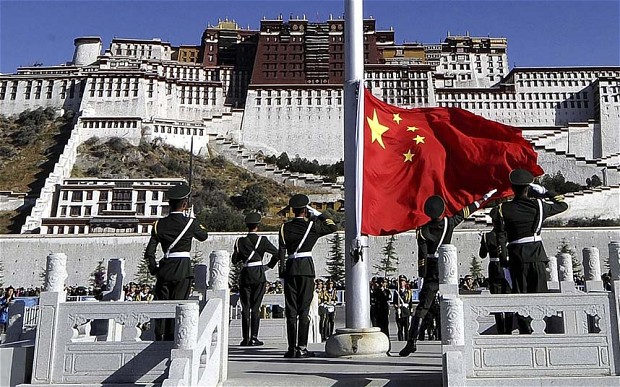 (TibetanReview.net, Jul31, 2015) – Ahead of celebrations marking the 50th anniversary of the establishment of the so-called Autonomous Region of Tibet, constituting the western half of ethnographic Tibet, China’s top decision making body has on Jul 30 vowed to safeguard national unity, strengthen ethnic unity, unswervingly carry out the anti-separatism battle, and promote patriotism in the region, according to the country’s official Xinhua news agency Jul 30. The purpose, the report said, was to achieve prolonged stability.

“Safeguarding national unity and strengthening ethnic unity should be highlighted in work involving Tibet,” a statement issued after the meeting of the Political Bureau of the Central Committee of the Communist Party of China (CPC), presided over by General Secretary of the CPC Central Committee and President of the country, Mr Xi Jinping, was quoted as saying.

The statement was also reported to have stressed: “Efforts should be made to unswervingly carry out the anti-separatism battle, promote the region’s economic and social development, safeguard and improve people’s welfare, and enhance exchanges and integration of different ethnic groups.”

China’s top leaders were also reported to have vowed to maintain in the region the highly repressive national religious policies and promote the ongoing patriotism campaign, which had led to large scale protests and brutal paramilitary police crackdowns, resulting in closing down of monasteries and expulsion of monks and nuns as well as many arrests, disappearances, deaths, and long prison sentences.

The statement was also reported to promise more support for a project designed to provide assistance to Tibet by pairing its cities with flourishing coastal cities and state-owned enterprises.