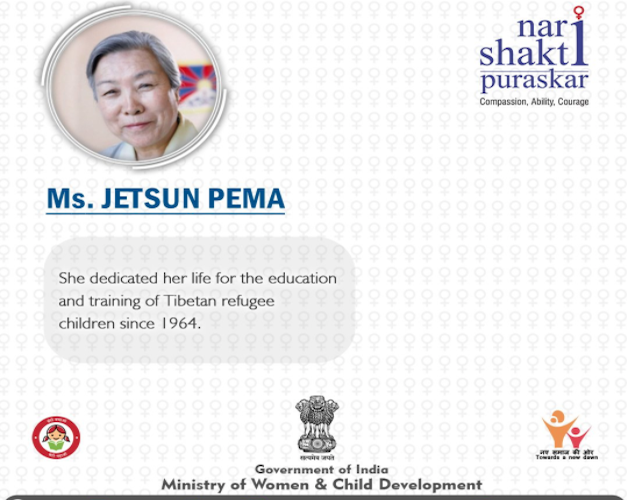 (TibetanReview.net, Mar11, 2018) – Ama Jetsun Pema, the Chair of the board of the Tibetan Children’s Villages, was on Mar 8 conferred with India’s highest civilian honour for women for her contribution to educating tens of thousands of children. She was among 30 eminent women and nine distinguished institutions who received the award in recognition of their efforts in rendering distinguished services for the cause of women and children.

The award was established by India’s Ministry of Women and Child Development in 1991 and is presented annually on the International Women’s Day.

The ministry said in its announcement of the award for her: “Jestun Pema has dedicated her life for Tibetan refugee children since 1964. With the assistance of the Government of India and other philanthropic organizations, Pema established a total of 10 residential schools, 17 day schools, 3 vocational training institutes, 3 hostels for college students and 1 college, spread across India.

“So far, 52,000 students have graduated from her institutions, of which 50 per cent are Tibetan refugees. Apart from Tibetan Children, her institutions also impart education to children from the Himalayan regions.”

The award, known as the Nari Shakti Puraskar, was presented by the President of India, Mr Ram Nath Kovind, at a function held at his official residence, the Rashtrapati Bhavan.

Ama Jetsun Pema, 77, is a sister of His Holiness the Dalai Lama. She was the first female minister in the Central Tibetan Administration, and had run the Tibetan Children’s Village schools for 42 years until her retirement in Aug 2006.

Her previous awards include the UNESCO medal in 1999.

In 1995 the Tibetan Parliament in Exile presented her with the title of “Mother of Tibet” in recognition of her service to Tibetan children.

Amala was unable to personally receive the award.