(TibetanReview.net, Oct30, 2015) – China has again earned the dubious distinction of being the “worst abuser of internet freedom”, according to an annual survey of Washington-based human rights NGO Freedom House which released its report on Oct 28. China, which scored 88 on a scale on which 100 was the worst, saw an erosion of its previous year’s score of 87, as President Xi Jinping deepened his stress on “cyber sovereignty” as a priority for sustaining Communist Party rule over the nation of 1.3 billion people, noted Radio Free Asia (Washington) Oct 28.

Acts of unconcealed aggression against internet freedom during the past year included crackdowns on “rumors,” greater enforcement of rules against anonymity, and disruptions to the circumvention tools that are commonly used to bypass censorship, according to the report.

“A range of issues are systematically censored, including independent evaluations of China’s human rights record, critiques of government policy, and the authorities’ treatment of ethnic minorities,” according to the Freedom House survey report. 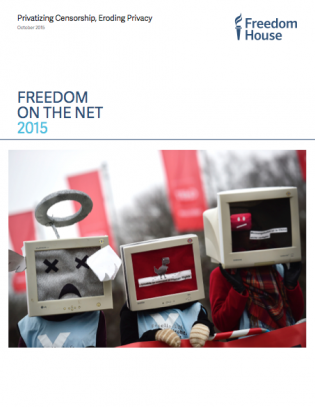 The report also says the Xi administration’s quest for control meant tough policies for foreign Internet companies, including Google, as well as “undermining of digital security protocols, and its ongoing erosion of user rights, including through extralegal detentions and the imposition of prison sentences for online speech.”

The report notes that in addition to at least tens of thousands of so-called “50 cent” commenters – those paid to post pro-government comments or derail critical discussions of China on-line – deployed in China, Chinese authorities also use paid commenters abroad, including on social media platforms that are banned in China, like Twitter. “Approximately 2,500 ‘50 Cent’ users on Twitter follow and retweet one another in order to create confusion and mislead the public.”

The only countries where the report finds internet to be less free than China were Syria and Iran.

The 968-page report covers the situation of internet freedom in 65 countries. Global internet freedom has declined for the fifth consecutive year, “with more governments censoring information of public interest and placing greater demands on the private sector to take down offending content,” the report notes.