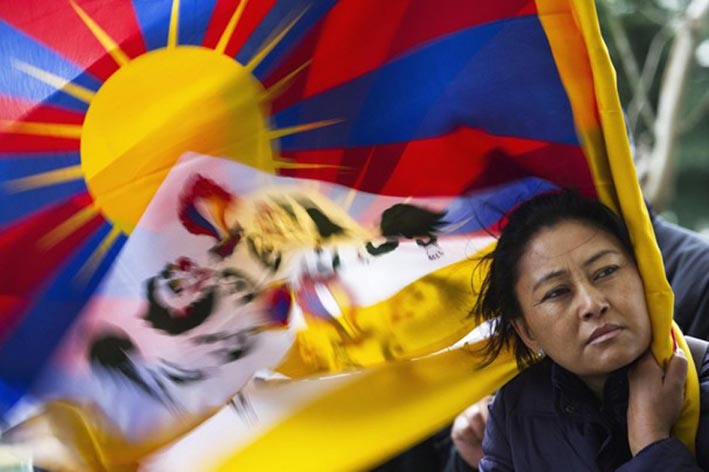 This editorial appeared in the March-April 2015 edition of Tibetan Review.

The immediate provocation for the Mar 10, 1959 uprising in Tibet’s capital Lhasa was China’s unmistakable intention to make a prisoner of Tibet’s temporal and spiritual leader, the Dalai Lama, by requiring him to attend a theatrical show at a PLA military camp without being accompanied by personal security guards. From a wider perspective, however, it was a culmination of China’s continued dilution of and reneging on its commitment to abide by a sort of “one country, two systems” agreement that it had dictated itself and forced the Tibetan side to sign in Beijing on May 23, 1951.

China’s intention behind provoking the Mar 10 uprising was to put an end to its eight-year nice-guy pretentions, to reveal the fangs and claws of its true intentions to put an end to the Tibetan civilization as one knew it over the past more than two millennia. The uprising protest, therefore, only precipitated the inevitable by may be just a day or so. In hindsight, one can see that China’s outrageous demand while “inviting” the Dalai Lama to its military camp was merely to create a pretext to put the blame for the end to the 17-point agreement on the Tibetan side by provoking them to protest as they did.

It was therefore rather ironical that, 56 years down the line, insisting on a sort of “one country, two systems” arrangement, this time raised by the official Tibetan side in the form of a middle way approach and campaign, should seem to lead to a disarray within the Tibetan civil society and Tibet support group movement while commemorating the uprising day.

Mercifully, it appears that the fallout has been contained, that the provocations in New York City, where objections were raised against a section of the Tibetan and Tibet support rally participants carrying banners and shouting slogans demanding independence for Tibet, had no apparent basis in the official positions either of the exile Tibetan administration or the involved middle way-supporting Tibetan groups themselves. In fact, one of the middle way troublemakers was said to be people claiming to represent the regional Tibetan Youth Congress whose parent body’s raison d’être is the campaign for independence. If this is true, there was clearly an attempt to subvert the Tibetan Youth Congress and its independence movement from within after a rather bitter failure to steer it under the middle way juggernaut over the past couple of years or so.

Those trying to render apostate the independence supporters apparently believe that China will grant Tibet the sort of autonomy – if it still could be called autonomy – the exile Tibetan administration seeks if only the independence campaigners will give it all up and join their ranks. This is not only a wishful thinking having absolutely no basis in China’s explicit position and ideology on the issue but also betrays a lack of understanding of the middle way approach itself. It has already been postulated that the middle way is not just a goal, but, more importantly, an article of faith which the exile Tibetan administration will adhere to whether China relents on it or not in any near future.

Does this mean, then, that those campaigning for independence are in defiance of the Dalai Lama? Certainly the hardliners among the middle way supporters seem to think so, quite contrary to what the Dalai Lama himself has said. The latter has been clear and explicit throughout that Tibet was historically an independent country, that those campaigning for it are good, patriotic Tibetans and have every historical and legal right to do so. His only pessimism over their stand remains that China will never grant Tibet its independence, nor is there any way Tibetans can reverse history by forcing the Chinese to leave Tibet somehow. He therefore thinks that they are being way to idealistic compared to what he feel is the more realistic middle way goal that he proposes.

The middle way approach is a significant climb down; it is all about tolerance, compromise, and accommodation towards China. To be unable to show the same magnanimity towards fellow Tibetans and other Tibet campaigners facing the same opposite camp not only seems to smack of hypocrisy but is also self-defeating. The ideal underlying the position of the independence campaigners is unexceptionable. We have the history of the 17-point agreement as a very concrete living memory of China’s irrefutable inclination for perfidy. What this experience teaches us is that even if the Chinese finally agree to discuss issues on the basis of the middle way approach, and eventually signs a deal, there is no guarantee that the 1951-59 history will not repeat itself. For a current living example of China’s lack of capacity to keep its promises, look at the fate of democracy in Hong Kong today.

On the other hand, if the middle way really succeeds for being realistic, as claimed, there is no way the independence campaigners will be able to sustain their position; rather, they will be forced by the enormity of the turn of events to conform. So, rather than targeting the harried and somewhat marginalized independence campaigners, the middle way advocates should, perhaps, vindicate their position by at least getting the Chinese to agree to enter into substantive negotiations. After all, the proof of whether this position is truly realistic depends on such a development taking place.

So far, the way the Chinese have taunted and trashed the middle proposal many times over is nothing to write home about. But, of course, as we have stated above, the middle way approach is not entirely about getting a positive result in the near future. But that is no reason to make a villain of those who think Tibet should be independent firstly because it is the Tibetan people’s historical and legal right and secondly because a deal somewhat resembling what the middle way proposes has already been historically discredited once and there seems to be nothing in the current Chinese leaders’ position which makes it more worth the while now.