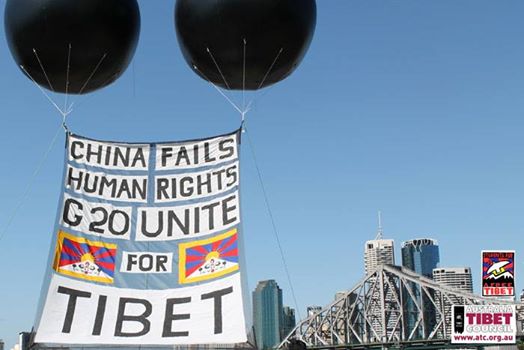 (TibetanReview.net, Nov16, 2014) – As leaders of the world’s 20 biggest economies and their central banks met in the Australian city of Brisbane beginning Nov 15 to mainly discuss spurring the global economic growth, campaigners for Tibet, like a number of other protest groups, staged a series of high-profile actions to draw attention to the tragic situation in Tibet under Chinese rule. With almost the entire downtown Brisbane being declared a security zone, Tibet activists had to resort to novelty and vigour to get themselves seen and heard.

Sbs.com.au Nov 14 cited Kyinzom Dhonghue, spokeswoman of the protest organizer Australia Tibet Council (ATC) as saying the group displayed the banner thus because it wasn’t allowed to do so within the G20 declared zone in Brisbane’s centre. “We’re encouraging like-minded governments to stand by their common democratic values and unite for Tibet and stand up to China,” Brisbane Times quoted her as saying.

While the summit’s focus is economic growth, Students for a Free Tibet (SFT) and ATC say that the crisis in Tibet creates a moral obstacle for countries doing business with China. Activists point to global inaction on Tibet, citing political intimidation by China towards world leaders, in bilateral talks, reported echo.net.au Nov 14.

Deputy Director of SFT Pema Yoko, who had flown in from New York for the G20, has pointed out that a joint G8 government pressure on Russia had forced Russian President Vladimir Putin to roll back repressive policies in Ukraine. She wanted the G20 leaders to apply similar multilateral pressure on China to help end the crisis in Tibet. “The only way China will change its violent course in Tibet is if global leaders, like those gathered here in Brisbane stand up for human dignity and hold China accountable for its abuses in Tibet,” the report quoted her as saying.

On Nov 15, when the G20 leader began their summit, Tibet activists and supporters held a Unite4Tibet rally. About 100 exiled former Tibetan political prisoners under Chinese rule and supporters from across Australia rallied in central Brisbane from about 10:00am to urge world leaders to support an end to China’s occupation of the region, reported abc.net.au Nov 15. It said the protesters chanted “human rights in Tibet” before laying down on the ground and pretending to die.

The report said the Tibet rally was one of 13 scheduled on the first day of the G20 summit. The biggest one involved about 2,000 protesters and was led by Aboriginal activists, with hundreds of police lining the route.

The annual G20 Summit, started in 1999, is constituted by 19 countries plus the 28-country European Union, with the summit’s president being entitled to invite guest countries.