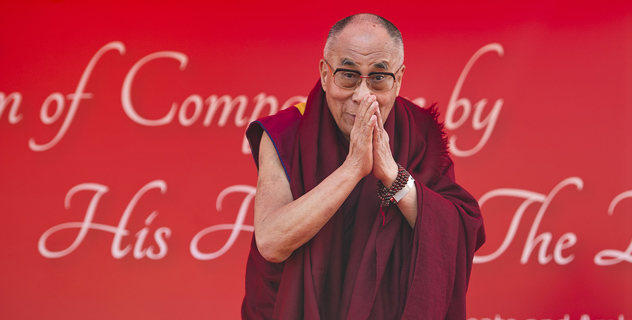 Prof Siddiq Wahid* argues that the Dalai Lama’s considerable climb-down in his position on resolving the Tibet issue has both served to expose the Chinese designs and provides a measure of his confidence in the power of truth.

(www.TibetanReview.net, May 29, 2008) There is an old Ladakhi saying, kor chag, mi sos: “The cup broke, and nourished the soul”. The Tibetan cup cracked almost sixty years ago, and broke when His Holiness the Dalai Lama fled to India forty-nine years ago. One of the most remarkable features of the Tibetan exile (of both, those who fled the Chinese occupation and of those who could not) has been the way in which they have cultivated the dharma and adapted their culture; not merely to survive but to give the world a glimpse of the results of an exilic life based on metaphysical truth. Over the last twenty years, as the so-called “new world order” has taken wing, we have repeatedly heard of how Tibet has become a lost cause because economic giant China has proven its resilience in the corridors of international power. The latest Tibetan cry from the heart, all over the world, has disproved this cynical prediction.

To be sure, Tibetans to some extent have become “prisoners of Shangrila”, as has been sharply shown by Donald Lopez in his book of that title some ten years ago. It is an approach that cultivates an image of Tibetans as a universally timid and powerless lot who are fated to disappear unless the world comes to their rescue. History and politics are much more complex and the latest events have shown that the Tibetans are far from powerless. As Lopez implies, this “Shangrila” image of the Tibetan hurts more than helps their cause; it is an orientalist argument that distorts history and in so doing weakens the struggle. An echo of this line of reasoning is still to be found in the arguments of sympathetic but fuzzy-headed liberals, the Hollywood brigade and politics of expedience.

In the last sixty years there have been a crop of splendid scholars (led by, amongst others, the late great Dawa Norbu of Jawaharlal Nehru University, Melvyn Goldstein of Case Western Reserve University and Tsering Shakya of the School of Oriental and African Studies) who have not hesitated to show, although in differently nuanced ways, that we must admit to and examine Tibet’s internally heterogeneous modern political discourse and its political mistakes since the early 20th century. Each of them has sought to set the historical record straight thereby, in the long run, strengthening the argument for a free Tibet.

It is this latter approach to the Tibetan case that needs to be adopted by the Tibetans and their sympathizers if the Tibetan struggle is to gain momentum, the Tibetans are allowed to reclaim their freedom, their redoubtable dharma-defined culture and their country. Nostalgic romanticism, in other words, is no match for looking at political truth straight in the face, no matter how formidable the adversary. South Africa, tiny East Timor and Kosovo are but some very recent examples of this simple fact of political reality.

Over the last ten years, I have been ‘fortunate’ to visit Tibet five times. Only the most subjective of minds can deny that Tibet, despite being so removed from the center of power, has been a beneficiary of China’s economic boom. The physical infrastructure in Tibet is more advanced and more widespread than anywhere in Southasia; the roads, the power supply and the communications systems are admirable progress. Similarly, the entire desolate stretch of alluvial fans between Gyantse and Shigaste, which used to be a trans-Himalayan desert plateau, is filled with lush green fields of barley and wheat that are watered by well-planned irrigation systems; and the markets of Lhasa, Shigatse and Gyantse are filled with department stores that are stocked with global goods. Yet the Tibetan people today have risen up as one, to say that none of it is enough. An elderly relative of mine, who lived in Lhasa before he made his escape in the late 1950s, made the same observation after visiting Tibet in the late 1990s. He tellingly added, “But nothing tastes quite the same.” Why is that so?

The Tibetan uprising of 2008 cannot be understood in the context of the simplistic paradigm of violence and non-violence in the Gandhian sense, as a friend and acute observer of political events, Maj-General (retired) Vinod Saighal, recently put it in a private communication. It is a cri de Coeur, a cry from the heart, that says, our stomachs may be full, we may have excellent roads and we may witness all the other benefits of that secular faith (I use the word advisedly) called “progress”, but our spirits must be free and we must be allowed to determine our future without fearing that our way of life will become extinct by the assertion of a brutal hegemonic homogeneity; for that, we are willing to be beaten, to be tortured and to die. It is a cry that will be recognized by all today who are coerced into accepting the argument of the inevitability of that uniquely post 20th century mutation of the ideology of faith in progress and the abandonment of the cry of the body to be in tune with its spirit; to be able to recognize itself.

The brutality of the government of People’s Republic of China, when it comes to its policies in Tibet, Xinjiang and even parts of its mainland, must be seen not just in the profane certitude of its policy pronouncements, its bamboo-curtained interpretation of events and its muscular nationalism, although these are bad enough, but in the context of its cynical calculations. This has been to take advantage of the expedient-prone cautiousness of US, Southasian and European policies towards it, its own demographic dominance and its ubiquitous economic spread. It is this that has caused the Tibetans to strike where it counts for the Chinese-state: their sensitivity to being embarrassed, to lose face, in a year of the Olympics during which China hopes to show-case its economic progress and its regional military might. Cherish the Tibetans for their courage and their capacity for upaya, “skill in means.”

The Dalai Lama, in his wisdom, has pronounced that the Olympics must not be damaged. We can attribute this wisdom in part to his concern for the lives and limbs of Tibetans in Tibet and his identification with compassion incarnate, being as he is the embodiment of Avalokiteshvara, the Bodhisattva of Compassion. In part we can also attribute it to his political wisdom in keeping the door open for dialogue. But what option do the ordinary Tibetans have? Especially in the face of the vicious personal attacks on the person of the Dalai Lama and the continued disingenuousness with which they have rejected huge concessions he has made to the Chinese State over the years. The Tibetans are doing what any peoples who are threatened with cultural extinction will do: they are saying, “thus far and no further.”

Elliot Sperling, in a recent opinion piece published in the Times of India (March 17, 2008), has faulted the Dalai Lama for his “political naiveté and desperation” which has resulted in “ratchet[ing] down” his position “from Tibetan independence, to real autonomy to simple cultural rights.” This is the argument of a political historian, looking at events from a perspective sympathetic to Tibetans but unable to identify with the real danger: a long term arrangement that regains territory but compromises a worldview. The Dalai Lama’s approach has served to expose this intent of the Government of the PRC. Its complete disregard for his reconciliatory line of attack has shown how confident it is in its disregard for the truth. The Dalai Lama’s method, in fact, is a measure of how confident he is of the strength of Buddhism to survive, even in China, if the latter guarantees real freedom to the Tibetans to practice their religion. As a Buddhist monk he cannot deny change, but he is confident enough to ask that the Tibetan people be allowed to dictate its nature and pace. The truth is that China is unwilling to do this. In the face of China’s turning a deaf ear to the truth, the only way the Dalai Lama and the Tibetans can fight back is to continue to tell the truth again and again to China and the world at large. As Chinua Achebe has said, “Telling the truth is the only way, in the long run, to get listened to.”

Cherish the Tibetan people, for they show the way to all who fight the uphill battle against today’s politics and ideologies of hegemonic homogeneity, everywhere.

* Prof Siddiq Wahid is the Vice Chancellor of the Islamic University of Science and Tech, Awantipora, Kashmir