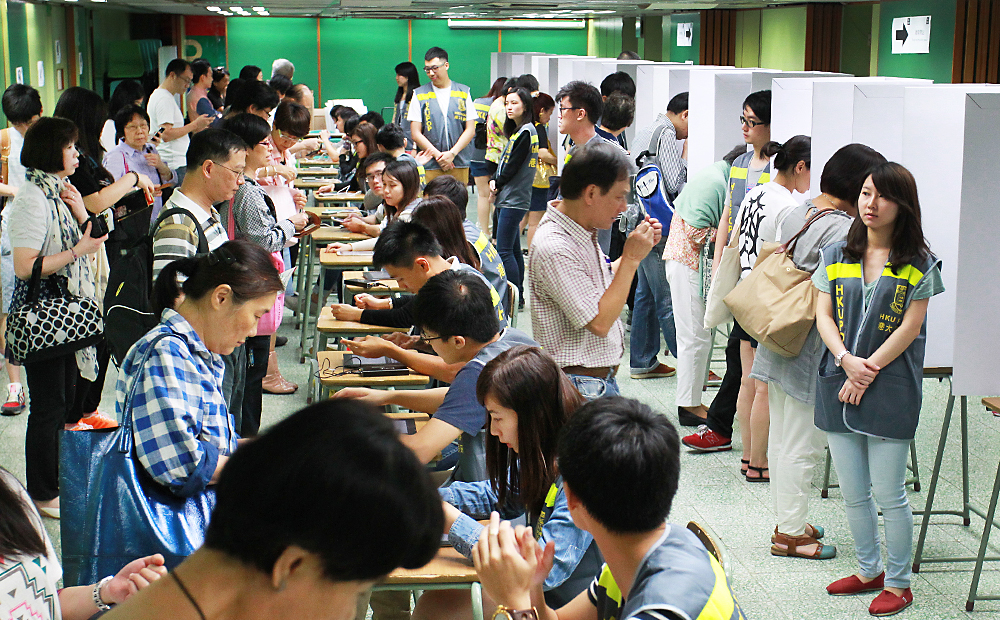 (TibetanReview.net, Jul01, 2014) –Nearly 800,000 residents of Hong Kong, a Special Administrative Region of the People’s Republic of China enjoying a “high degree of autonomy” under the terms of its return from British rule on Jul 1, 1997, have voted in an unofficial 10-day referendum demanding universal suffrage for the election of their top government official, the Chief Executive. China had indicated in the past that the Hong Kong public could directly choose its chief executive in the 2017 election, but only from a list of candidates selected by a 1,200-member nominating committee that is pro-communist government in Beijing.

Fearing that China will use the committee to screen out candidates it disapproves of, especially after it issued a white paper on Jun 10 which emphasized the “one country” but downplayed the “two systems” aspect of the terms of Hong Kong’s return to Chinese rule, a group called Occupy Central movement for democracy launched the referendum on Jun 20.

A total of 792,808 voters, representing almost a quarter of the 3.47 million who registered to vote at elections in 2012 in a city of 7.2 million, have taken part in the referendum, reported AFP Jun 30. The referendum offered the voters three options for determining candidates for the chief executive’s election. According to BBC.com Jun 30, about 42% of voters backed a proposal allowing the public, a nominating committee, and political parties to name candidates for the top job. This winning proposal, put forth by the Alliance for True Democracy, allows candidates to be nominated by 35,000 registered voters, or by any political party which had secured at least 5% of the vote in the last election for Hong Kong’s legislative committee. And if the candidates are to be named by a committee, the proposal requires the formation of this committee to be “as democratic as it can be.”

The other two proposals in the referendum allowed only the public and a nominating committee to name candidates.

While China has dismissed the referendum as “illegal”, Chen Jianmin, sociology professor at the University of Hong Kong and one of the founders of Occupy Central, has explained why the exercise was necessary. “I believe that people feel that our autonomy has been threatened and is going to be threatened even more by Beijing. People feel outrageous [sic outraged] and so they want to make their voice heard,” the BBC.com report quoted him as saying. And the large turnout is seen as sending a strong message to Beijing that a significant part of the Hong Kong public is unhappy with the Chinese government’s plans for reform in the election system indicated in the white paper.

Some 88 percent of those who voted in the referendum have urged the city’s lawmakers to veto any political reform plans from Beijing that do not meet “international standards,” said the AFP report.

Organizers of the referendum have threatened a mass sit-in in Hong Kong’s business district later this year unless authorities come up with acceptable electoral reforms.

China’s state media has slammed the referendum as unpatriotic and one driven by “political paranoia”, or even as an “illegal farce”. China’s official China Daily newspaper has called the poll an “unconstitutional political charade” while accusing the US of funding its organizers through various ‘private’ channels.” It did not explain how.

The Hong Kong government gave a nuanced response to the referendum. “We respect the right of the people to express their views and we also understand that there are different views in society,” the AFP report quoted a Hong Kong government spokesman as saying in a statement late Jun 29. And China Daily Jun 30 cited Hong Kong’s Chief Secretary Carrie Lam as saying that the city government would “treasure” opinions expressed by “the means of voting”. However, it also cited Lam as maintaining that the government, regardless of political circumstances, will not put forth a reform package that does not conform with the Basic Law (Hong Kong’s mini constitution) and relevant decisions made by the Standing Committee of the National People’s Congress of the PRC. The mini constitution gives the authority to interpret its provision to the Chinese National People’s Congress.