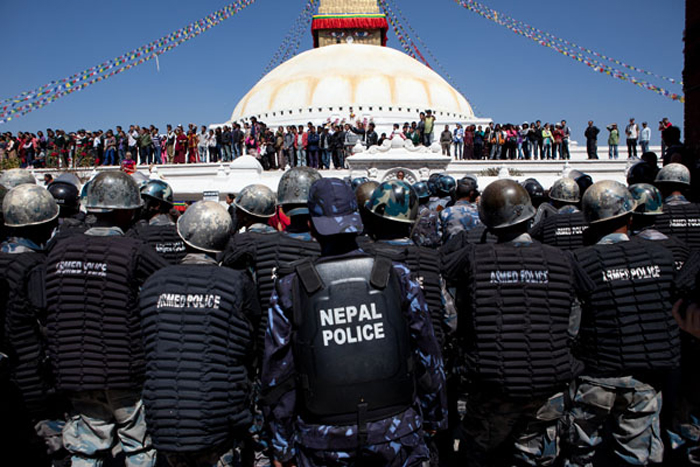 (TibetanReview.net, Jul04’19) – Apart from deferring to China on how it deals with Tibetans on its soil, Nepal is said to come down on its own journalists for reports Beijing does not like or on politicians who show any bit of interest on Tibet related issues. China is Nepal’s biggest investor and aid giver, and Kathmandu looks to Beijing to bear the billions of dollars cost of building a proposed Tibet-Kathmandu railway line as a grant under China’s globally ambitious Belt and Road Initiative.

Nepal has a Chinese government produced or directed black list of people to be debarred from entering the country, as became clear from its Jun 22 blunder of deporting from the country’s international airport of a US citizen named Penpa Tsering, a namesake of a former Speaker of the Tibetan Parliament in Exile. The country’s immigration authorities’ only reason for subjecting him to hours of humiliating interrogation and then deporting him was that this name was on China’s ‘most-wanted’ list.

Nepal’s media has also been seen to be subject to government crackdown when they cover Tibet related matters or other issues China does not like.

A VOA report Jun 28 cited Anil Giri, foreign affairs correspondent for the Kathmandu Post, as saying journalists were being discouraged from covering Tibetan affairs to mollify China. The fact that China sponsors junkets for Nepalese journalists is one probable reason why “we don’t see lots of criticism about China’s growing investment in Nepal, Chinese doing business in Nepal and China’s growing political clout in Nepal.” He has also said Nepali government officials shy away from reporters seeking comments on China-related stories.

The report further noted that in Jun 2019, Nepalese government officials began investigating three journalists from a state-run news agency Rastriya Samachar Samiti (RSS) who had reported on the discharge of the Dalai Lama from a New Delhi hospital. The agency’s chair, Hari Adhikari, told Indian news outlets that the issue was “very sensational for us”. (sic)

Gokul Baskota, Nepal’s minister of communications and information technology, was cited by the Kathmandu Post as saying he ordered the investigation, noting, “We should be sensitive to our neighbour’s concerns.”

Dilliram Batarai, one of four members of a committee assigned by RSS chairman Harikar Adhikari, was quoted as saying, “RSS is a state-run news agency, …, and our investigation will be guided by Nepal’s relationship with China, by the One-China policy, and by Nepal’s foreign policy. So we report to higher authorities.”

The report also noted that the pro-China, and therefore anti-Tibetan, mood prevails among Nepal’s political parties as well. It cited the case of the Samajbadi Party of Nepal’s recent suspension of lawmaker Pradip Yadav for six months for having attended a Tibet support conference in Europe in May 2019. The party said it reached the decision after finding his explanation for attending a programme called “Free Tibet” in the Latvian capital Riga “unsatisfactory”.