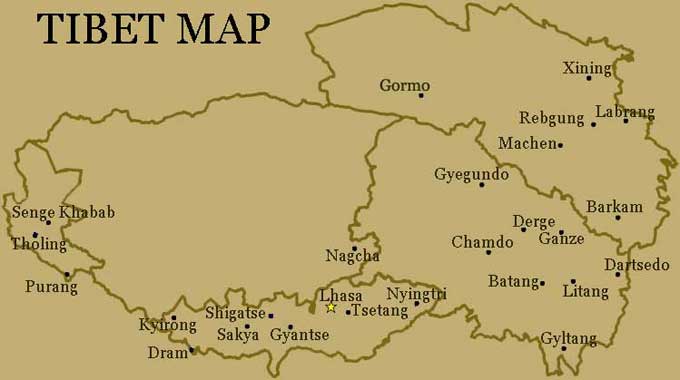 Lobsang Tenzin, about 60, and Tsultrim, age unknown, were accused of “working with the Dalai clique and misleading people on the worship of Shugden,” the report quoted a local source as saying, speaking on condition of anonymity. More details about the two persons and their cases could not be obtained due to China’s tight restrictions on communication.

Their sentencing followed a one-and-half-year jail sentence for a 77-year-old man named Jamyang Tsering by a court in the same area for the same offence and at about the same time. Also a native of Chamdo and living in Tibet’s capital Lhasa, Jamyang Tsering, who suffers from any ailments, had sought to encourage a group of Chamdo-area students visiting the city to follow the wishes and guidance of the Dalai Lama and to always “hold to their pride in being Tibetan”.

The report said Lobsang Tenzin was detained in Jun 2014 from Tibet’s capital Lhasa – like in the case of Jamyang Tsering – where he had retired after working as a driver and tour guide. He was later said to have returned to Dzogang County and begun advising the lay public and the monastic community to obey the instructions of the Dalai Lama and abandon the worship of Shugden as this would be in the best interest both of individuals and the community.

The Dalai Lama says the 17th century-origin Shugden, also known as Dolgyal, is both malevolent and religiously divisive, and worshipping it un-Buddhist. China has called Shugden an innocent deity and criticized the Dalai Lama for allegedly banning its worship. It is also accused of supporting those in the outside world who carry out slanderous campaigns against him over this issue.