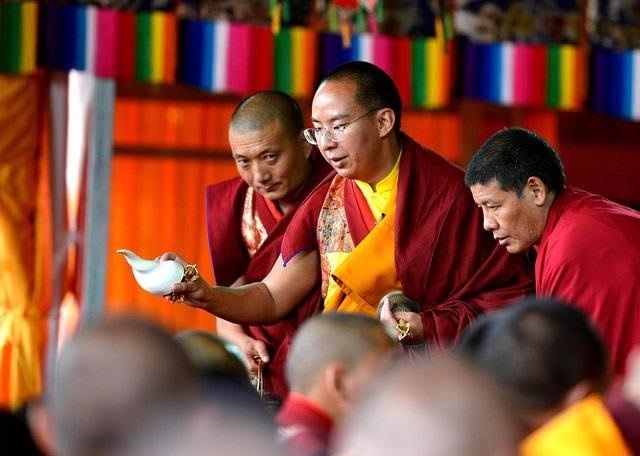 (TibetanReview.net, Oct16’19) – China has expressed hope Oct 15 that the 11th Panchen Lama it had appointed in 1995 to replace the boy recognized by the Dalai Lama would play leading role in the Sinicization of Tibetan Buddhism as the latter presented to the Communist Party of China (CPC) Central Committee a large Thangka painting in Beijing. The main purpose of the presentation was stated to be to commemorate the 70th anniversary or the founding of the People’s Republic of China.

The painting, depicting a scene of the ‘Panchen Lama’ presenting to President Xi Jinping a hada scarf, expresses the resolute support to the CPC, the heartfelt love for the people’s leader and the love for the motherland, the report said.

Ding was reported to have expressed hope that the ‘Panchen Lama’ will closely follow the CPC Central Committee with Comrade Xi Jinping at the core, pass on and promote the previous Panchen Lamas’ honorable traditions of loving the country and the religion, and unswervingly safeguard national unity and ethnic solidarity.

In particular, he hoped the ‘Panchen Lama’ will play a leading role in promoting Tibetan Buddhism’s adaptation to the socialist society.

Responding in kind, the ‘Panchen Lama’ has undertaken to unswervingly uphold the leadership of the CPC Central Committee with Comrade Xi Jinping at the core. He has expressed the determination to consciously safeguard national unity and ethnic solidarity, actively contributing to socialism with Chinese characteristics and promoting social harmony and stability in Tibet.