(TibetanReview.net, Jul22’20) – Laying new claim to a new piece of territory in eastern Bhutan, China has called for a ‘package solution’ by merging it with existing disputed border areas. Its justification is that the boundary between the two countries arising from its occupation of Tibet was yet to be demarcated. The raising of the new dispute is seen as being especially directed against India.

In early June, China astonished everyone present when it staked claim over the Sakteng Wildlife Sanctuary in Bhutan’s Tashigang district at a Global Environment Facility (GEF) Council virtual meeting and opposed funding to the project. 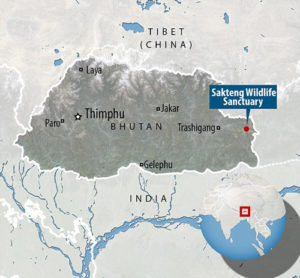 The council was reported to be so unimpressed with China’s claim that it would not even allow the details of its objection to be recorded in minutes of the meeting, only a footnote that said China “abstained” from voting on the SWS grant.

Bhutan’s views were also made part of the meeting’s record: “Bhutan totally rejects the claim made by the Council Member of China. Sakteng Wildlife Sanctuary is an integral and sovereign territory of Bhutan and at no point during the boundary discussions between Bhutan and China has it featured as a disputed area.”

And now Chinese Foreign Ministry spokesman Wang Wenbin has told a media briefing in Beijing on Jul 21 that the boundary between the two countries was yet to be demarcated.

“China’s position remains consistent and clear. The boundary between China and Bhutan has not been delimited and there are disputes in the middle, eastern and western sections,” the PTI news agency Jul 21 quoted him saying.

Advocating a package solution to resolve the ‘dispute’, Wang has said, “China is opposed to making an issue of these disputes at multilateral forums and China remains in communication with the relevant parties on this issue.”

Bhutan’s embassy in New Delhi had issued a demarche to the Chinese Embassy over Beijing’s claim over the sanctuary after the early June incident.

China and Bhutan do not have diplomatic relations but maintain contacts through periodic visits by officials. The two countries have held 24 rounds of boundary talks from 1984 to 2016 in a bid to resolve the boundary dispute.

But the boundary dispute has always centred only on western and central sections of the boundary, never in eastern Bhutan over which China is now laying claim.

Earlier, in a statement made to it in July, the Chinese foreign ministry had put on record its claims in the eastern sector. After saying that the China-Bhutan boundary had never been delimited and there “have been disputes over the eastern, central and western sections for a long time”, the statement in Mandarin added “a third party should not point fingers” in the China-Bhutan border issue – an apparent reference to India, noted hindustantimes.com Jul 21.