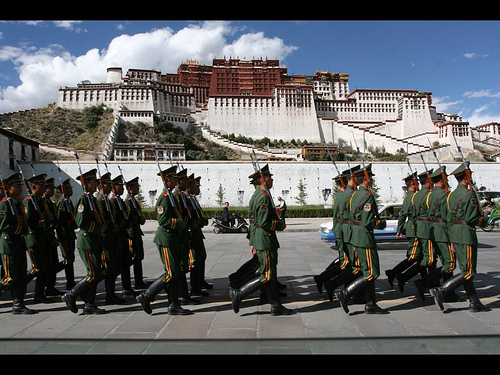 (TibetanReview.net, May14, 2016) – China has raised the political rank and authority of its Tibet Military Command to one level higher than its counterpart provincial-level military commands, placing it under the direct leadership of the PLA Army, reported China’s official globaltimes.cn May 13. The Tibet Military Command bears great responsibility to prepare for possible conflicts between China and India, and currently it is difficult to secure all the military resources they need, the report cited Song Zhongping, a Beijing-based military expert, as saying.

“The elevation of the authority level is not only an improvement for the troops’ designation, but also an expansion of their function and mission,” the report quoted Zhao Zhong, deputy director of the Political Work Department of the Tibet Military Command as saying, citing China Youth Daily, which carried the original report.

Explaining the significance of the development, globaltimes.cn quoted an unnamed source described as close to the matter as saying: “After the [recent] military reform, most of the provincial military commands are now under the control of the newly established National Defense Mobilization Department of the Central Military Commission, and their priority is to the region’s militia reserves and conscription. The Tibet Military Command, on the other hand, is under the leadership of the Chinese ground forces, which suggests that the command may undertake some kind of military combat mission in the future.”

The report also said the Xinjiang Military Command’s political rank may also be raised in the future. it added that the military commands in Tibet and Xinjiang had always enjoyed special political status in the past and the promotion in rank this time reflected a continuation of China’s policy.

The report also quoted a Beijing-based military expert, who requested anonymity, as saying: “China’s military reform has been focusing on the construction of the Western Theater Command, as well the military deployment and national defense mobilization in the region. As a key part of the Western Theater Command, the elevation in rank of the Tibet Military Command will also boost its combat abilities.”