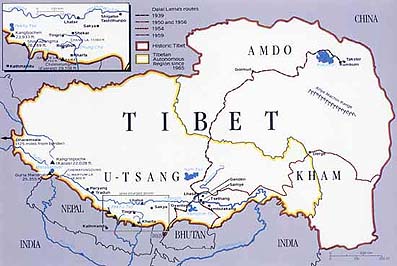 (TibetanReview.net, Aug23, 2014) –The atheist government of China said Aug 22 that its local authorities in the Tibet Autonomous Region had permitted a total of 358 Rinpoches, or reincarnated spiritual masters, to be enthroned. Some 40 were enthroned according to the historical custom and religious ritual in recent years, said China’s online Tibet news service eng.tibet.cn Aug 22, citing Trinley Dorje, director of the Tibet Committee of Ethnic and Religious Affairs.

Under Regulations on Reincarnation of Living Buddhas in Tibetan Buddhism issued by China’s State Administration of Religious Affairs, which came into forced on Sep 1, 2007, a reincarnation of a “living Buddha” is considered illegal and invalid unless the procedure takes place under the Chinese government’s supervision and receives final approval from the relevant level of the Chinese government authorities.

Under the regulations, reincarnations of the highest-level rinpoches, such as the Dalai Lama, the Panchen Lama, and the Karmapa, must be approved by Beijing. The Dalai Lama has rejected the Chinese regulations and also pointed out that it was for the concerned reincarnate to determine where he will be reborn. This was after China mandated that all Tibetan Buddhist reincarnations, including that of the Dalai Lama, should occur only in the People’s Republic of China.

The Dalai Lama said the purpose of reincarnation was to continue the unfinished work of one’s predecessor and so his will take place only in a territory not under Chinese government control. China has insisted, however, that the next Dalai Lama will be one chosen by it.

On May 3, 2008, a Special Meeting in exile of the heads of the four schools of Tibetan Buddhism and the pre-Buddhist Bon religion of Tibet passed a resolution, saying no reincarnations of Lamas and Tulkus of the Tibetan Buddhist and Bon religions will be considered true unless they were given final approval by the heads of their respective religious traditions. The statement rejected China’s claim for the right to control the procedure for the recognition as well as to give final approval for the selection.