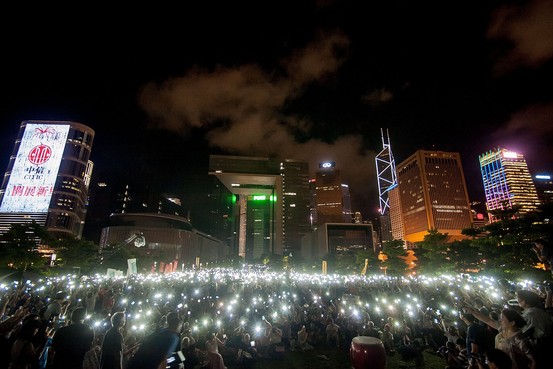 (TibetanReview.net, Sep02, 2014) – China has decided to allow the people of the Special Administrative Region of Hong Kong to directly elect their leader in 2017 but only from amongst a list of candidates supported by it. This list will be determined by a committee most of whose members support and take orders from the Chinese government in Beijing. The development is seen as likely to plunge Hong Kong into one of the worst political crises since its handover from Britain on Jul 1, 1997.

The decision from the Standing Committee of the National people’s Congress (NPCSC), the Chinese parliament, came despite threats from pro-democracy activists to occupy the island’s central financial district unless Beijing decides to allow open nomination of candidates for the next election of Hong Kong’s Chief Executive.

At the time of its handover, China had agreed to govern Hong Kong under the principle of “one country, two systems”, with the island city being given a high degree of autonomy, except in foreign and defence affairs, for the next 50 years. This has enabled Hong Kong to have its own legal system and democratic rights, including freedom of assembly and speech, denied in China proper.

Hong Kong’s mini-constitution, the Basic Law, aims to allow residents to elect their chief executive “by universal suffrage” and China had promised such a direct election for in 2017.

On Aug 31, 2014, the NPCSC unanimously passed a resolution stating that there must be a “broadly representative” nominating committee to vet contenders for the election in 2017. It said the committee’s composition and size must match those of the 1,200-strong election committee that currently picks the Chief Executive. That committee is filled with Beijing loyalists and industry interests.

The NPCSC guideline entirely ignores the result of an unofficial referendum held by the Occupy Central movement, Led by academic Benny Tai, from June 20 to 29, 2014. The referendum asked voters to choose from three proposals for the 2017 election, all involving allowing citizens to choose who to nominate as candidates for the top job. A total of 792,808 voters, one fifth of the total number of registered voters, cast ballots.

Later, on the handover anniversary of Jul 1, tens of thousands of protesters took part in a rally, which was Hong Kong’s largest pro-democracy rally in a decade. Those pressing for greater suffrage include lawmakers, academics, students and ordinary citizens.

On Aug 17, Pro-Beijing groups, such as Silent Majority for Hong Kong and Caring Hong Kong Power, held their own rally. Although thousands took part in that rally, its legitimacy was questioned by some who pointed out that many of the protesters were paid to participate in the rally.

A number of businesses, which tend to be pro-Beijing, took out advertisements in the local media, saying the city’s status as an international trading hub was at risk should the Occupy Central Movement go ahead with its takeover.

But the Occupy Central remains unperturbed and has said the time for dialogue is over and pledged a series of actions culminating in a mass sit-in of at least 10,000 people in the financial district in Hong Kong. Opposition lawmakers have also vowed to block the passage of the electoral Bill, which will require two-thirds of the 70-member legislature to support it. This means the legislation could be halted by the 27 opposition members. But if the proposal is rejected, Hong Kong will continue to have its leader picked by the existing 1,200-member election committee that is predominantly pro-Beijing.