(TibetanReview.net, Nov18, 2015) – Although acknowledging the primacy of protecting the region’s fragile environment in repeated official remarks, the Chinese government of Tibet Autonomous Region (TAR) has, in an effort to boost economic growth, launched an ambitious 10-year plan for a stupendous growth in the bottled water industry there. The long-term ambition is to produce 10 million cubic metres of bottled water by 2025, compared to the production at the beginning of this year reportedly of just 153,000 cubic metres, said a thethirdpole.net report cited by theguardian.com Nov 16.

The report said that in an effort to boost growth, the government of TAR had approved licenses for 28 companies to produce bottled water by the end of last year. It added that bottled water activities were also growing rapidly in neighbouring Xinjiang, Qinghai and Yunnan provinces, with companies even bottling water straight from the tongues of rapidly melting glaciers. 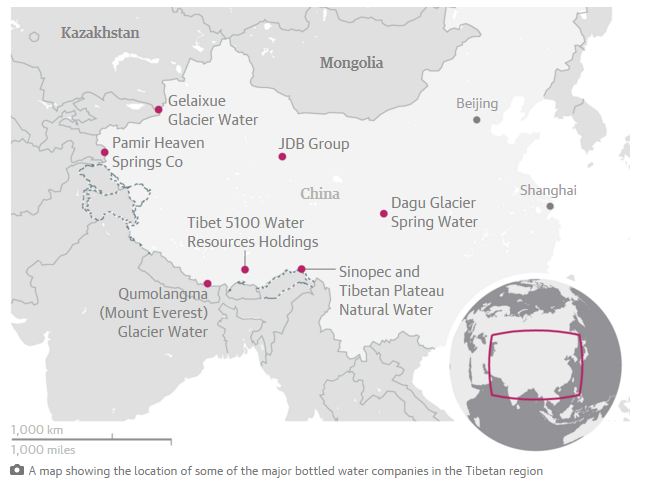 The Everest range is also fair game, the report said, adding, one company, Qomolangma Glacier Water, was bottling water from a national reserve located only 80km from the Everest base camp.

Even China’s top oil and hydro-electric power companies are rushing to invest in the TAR’s bottled water industry, the report noted. For example, last year, the TAR government signed 2.6 billion yuan deals with various investors, including the state-owned oil producer Sinopec and the Three Gorges Group, which owns the world’s largest hydroelectric power station in Hubei province. The report added that since early 2015, the Sinopec Group had sold glacier water bottled from the TAR in its 23,000 petrol stations and convenience stores across China.

The new bottled water industry expansion plans in the TAR, which include preferential tax rates, tax exemptions and low-interest loans, indicate that local policies appear to be misaligned with China’s supposedly strengthened national policies to conserve forests and natural protection zones. Besides, China’s official commitment to deal with climate change also includes actions to protect its glaciers, the report pointed out.

The report said that if the bottled water industry runs wild, this could lead to a new set of environmental problems. It pointed out that there were no environment impact assessments and the majority of companies hadn’t released reports on water-source protection, pollution control, water efficiency or benefits for local people.

The report noted that companies that do disclose information, such as the Hong Kong-listed Tibet 5100, had claimed that the amount of water withdrawn from springs or glaciers was not enough to dry them up. However, the report asks, is it ethical to withdraw any water from protected areas where glaciers are already shrinking and where the central government had invested billions of yuan in conserving the region for climate adaptation and mitigation?