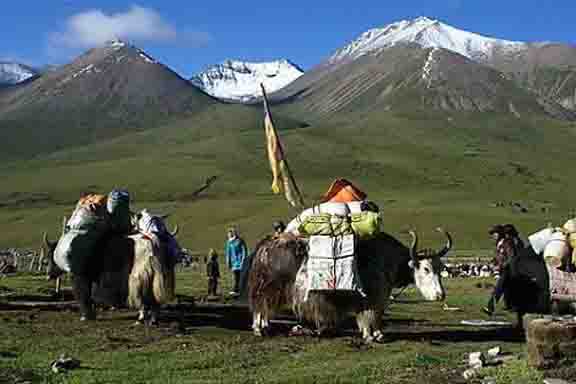 (TibetanReview.net, Jul24, 2017) – A Chinese professor has invented a modified wheelbarrow with a pedal-operated fork designed to greatly lighten the daily chore of the Tibetan nomad women in their collection of yak and cow dung, reported China’s official Xinhua news agency Jul 22.

Collecting the dung of cows and yaks for use as fuel for cooking and heating has been a daily chore of the Tibetan nomad women for hundreds of years. And the report said the back-breaking task begins at daybreak and it often takes three to four hours to fill the 10-kg basket they carry on their back.

Now, thanks to Wang Guanghui, the product’s inventor and a professor at the College of Engineering at China Agricultural University, the task is completed much faster and requires no “tedious manual labor”. His modified wheelbarrow with a pedal-operated fork simply scoops up the dung and tosses it into the bucket. 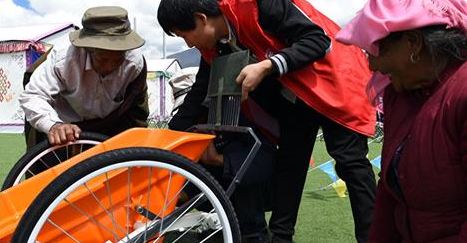 Trials in Tibetan areas of Gansu, Qinghai and Sichuan provinces showed that the wheelbarrow is six times faster than collecting dung by hand, Wang was quoted as saying.

The report said that while conducting a summer research programme in Gannan (Tibetan: Kanlho) Tibetan Autonomous Prefecture, Gansu Province, in 2011, he was touched by the repetitive hard work being undertaken by local Tibetan women and came up with the idea of inventing the wheelbarrow.

“Their backs become bent from the daily chore. But without collecting dung, their families have no chance of survival,” Wang was quoted as saying.

The report said Wang had revised his design eight times over the last six years to best suit the needs of the nomads.

The report said that the wheelbarrow is made up of eight components and could be assembled in three minutes, using only a few screws and nuts. It weighs less than 10 kg and costs 1,000 yuan (US$ 148) each.

However, the first batch of all the 1,000 wheelbarrows were given to Tibetan nomads with financial difficulties in Nagqu (Tibetan: Nagchu) and Damxung (Damshung) counties in Tibet Autonomous Region. To qualify for a free wheelbarrow each family was asked to donate two bags of dung to a local school or kindergarten.

The report said the programme was organized by Beijing Society of Workers Contributing to Tibet’s Development, a non-governmental public welfare organization.

Wang has said the wheelbarrow continues to be in trial use in the two Tibetan counties and that large-scale production will depend on feedback from the nomads.

The report said there were still 750,000 nomadic herding families in Tibet Autonomous Region and the Tibetan-inhabited areas of Qinghai, Sichuan, Yunnan and Gansu provinces.

Dung will continue to be their major residential energy resource as moving with their herds will not allow them convenient access to electricity supplies even after China has achieved its goal of building a moderately prosperous society by 2020, Fan Xiaojian, director of the society and a member of the National Committee of the Chinese People’s Political Consultative Conference, was cited as saying.