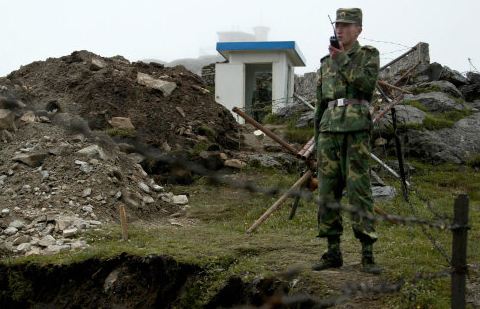 (TibetanReview.net, Jun27, 2017) – In yet another instance of needling India, Chinese troops have crossed into the state of Sikkim and jostled with Indian Army personnel guarding the border with occupied Tibet over the past 10 days, according to India’s PTI news agency Jun 26. The intruders were reported to have destroyed two Indian bunkers.

The report said the face-off between troops on two sides of the border had been going on in Doka La general area in Sikkim. It added that Indian troops had to struggle hard to stop the Chinese personnel from advancing further into Indian territory.

The Indian side was reported to have formed a human wall along the Line of Actual Control (LAC) to stop the PLA personnel, some of whom also videographed and clicked pictures of the incident. The destroyed bunkers were reported to be in the Lalten area of the Doka La.

The report said tension was continuing despite a flag meeting that was held between senior army officers of the two sides on Jun 20.

Doka La is at the Sikkim-Bhutan-Tibet tri-junction. In Nov 2008, Chinese troops had destroyed some makeshift Indian army bunkers at the same place.

PTI said the transgression report was confirmed hours after it reported that China on Jun 26 said it was in talks with India over its denial of entry to 47 Indian pilgrims who were scheduled to travel to Kailash Mansarovar in Tibet through the Nathu-la pass in Sikkim.

The Indian pilgrims were to cross over to Tibet on Jun 23 after postponing a Jun 19 entry, but the Chinese side refused to open the gate, forcing them to return to the state capital Gangtok and prompting New Delhi to take up the issue with Beijing.