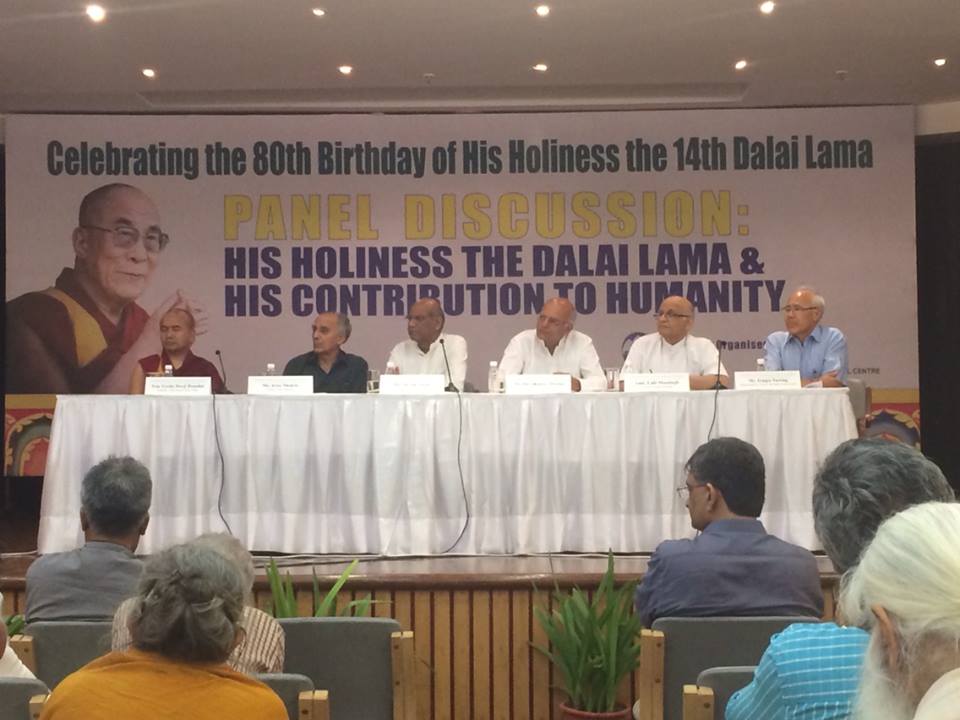 Mr Saran who chaired the panel said, offering a collective greeting of the gathering to the Dalai Lama, “We have been singularly fortunate and privileged to have a person of his eminence, a person who command international respect and reverence as a humanist, as a religious leader, that he has chosen our country as his home, it is truly something we should take as a blessing for all of us.”

Mr Shourie called the Dalai Lama “an exemplar of converting suffering into a benediction”, the “great suffering of his people and therefore of himself into the benediction for all of us”. He keeps on saying out of politeness and to encourage us that I am bringing back to India the tradition that was from here, but actually matter of fact is we have forgotten that tradition completely”.

He said that despite the smallness of the exile Tibetan community – at about 200,000 across the world – and the fact that the world does not care about oppression of other peoples, the Dalai Lama had, by “his continuous presence, his good cheers, his giving us his teaching and his time, … made the Tibetan cause everybody’s cause”.

Mr Mansingh saw the Dalai Lama’s greatness in his having restrained his supporters from using violence against the occupiers of his homeland or expressing hatred against them. He also said India needed to be more assertive in expressing concern about the Tibetans and their fate. There was “nothing in India’s foreign policy that says we cannot express concern for the rights or fundamental rights of people who are oppressed”, the IANS news service Jul 5 quote him as saying.

He pointed out that independent India’s first Prime Minister, Jawaharlal Nehru, had accepted that he had let Tibet down, saying, “‘I failed Tibet. I failed to protect Tibet’; it requires a big man to accept that we didn’t succeed.”

Mr Menon called the Dalai Lama a true example of leadership, a man without an army, a government, or wealth, living in exile from his own land, but the most powerful refugee in the world. He also called him a spiritual leader not confined to one religion or faith and who has a global influence, with his words and actions inspiring people across the world.

And Geshe Dorji Damdul called the Dalai Lama a messenger of hope in a very real sense, a person who is loved by people around the world for his messages of universal brotherhood and because of his personal qualities.

A large number of scholars, thinkers, writers, serving and former India civil servants, retired military officers, and political officers from foreign missions in New Delhi attended the panel discussion, which was held at the India International Centre (IIC). It was organised by the Bureau of His Holiness the Dalai Lama and Tibetan Community in Delhi in collaboration with the IIC.