(TibetanReview.net, Jan09’16) – The disappearances since last October of five owners or employees of a publishing firm in Hong Kong have alarmed rights groups and the Chinese publishing community overseas especially because they are widely suspected to have been kidnapped and taken to China by communist Chinese police agents. In fact, China’s Foreign Minister Wang Yi has cautioned against “groundless speculation” in the case of five missing people while speaking at a press conference in Beijing on Jan 5. However, he then went on to say that one of the missing individuals, 65-year-old British citizen Lee Bo, was “first and foremost a Chinese citizen,” reported time.com Jan 5.

Lee was the latest member of Mighty Current Media, which publishes books on Chinese leaders banned in the mainland, to have vanished since the company’s owner failed to return from a holiday in Thailand last October. Four others, one of them a Swedish national, and including the company’s general manager, had also gone missing while traveling overseas in October. A sixth employee has told BBC correspondent Rupert Wingfield-Hayes that he was afraid he would vanish next.

Lee was later reported to have called his wife Sophie Choi to tell her he was “assisting” an unspecified police investigation across the border in Shenzhen. However, Choi has said his mainland travel permit, which Hong Kong residents must produce when crossing the border into mainland China, was still at home. There is thus no official record of Lee leaving Hong Kong.

But Lee could not have gone to the mainland by himself. “In recent interviews, Lee said he hadn’t been to the mainland for two or three years [because of fears for] his safety. I doubt he changed his mind,” Willy Lam, a legal scholar at the Chinese University of Hong Kong, has said.

Lam has said that snatching a person in Hong Kong would be an easy task for mainland Chinese police, whose vehicles “can come and go across the border without stopping at border control.” 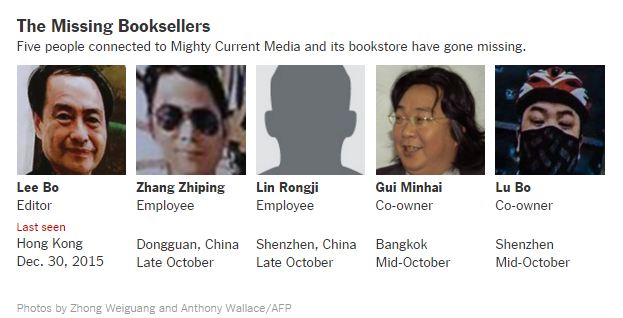 The 22-year old bookstore of the publishing firm is one of the most popular independent bookshops in Hong Kong city and has long attracted mainland tourists due to its massive collections on Chinese politics.

Albert Ho, a legislator in Hong Kong, the Bookstore was planning to publish a book concerning the private life of President Xi Jinping, and was warned not to do so.

Global Times, an overseas mouthpiece of the Communist Party of China, has recently published an article claiming that the abduction of Lee was “legal and justifiable,” noted a report on the abductions carried by hongkongfp.com Jan 7.

Lee’s, and possibly his four colleagues’ abduction as well to the mainland is seen as constituting a flagrant and unprecedented breach of the autonomy that Beijing promised Hong Kong upon the former British colony’s return to Chinese sovereignty in 1997.