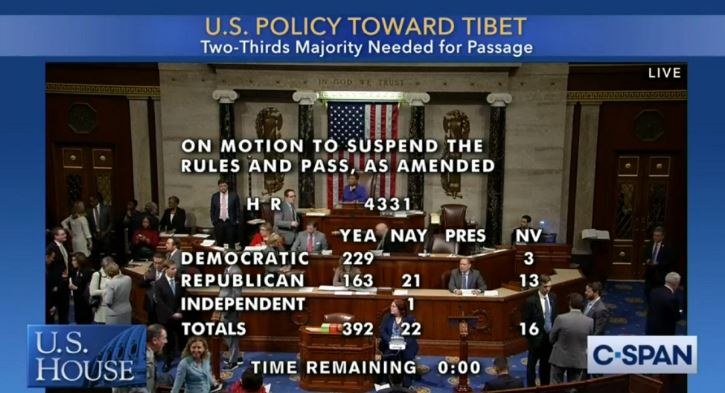 (TibetanReview.net, Jan29’20) – The US House of Representatives voted unanimously Jan 28 to approve a comprehensive piece of legislation that will dramatically upgrade US political and humanitarian support for Tibetans, including the sanctioning of Chinese officials for interfering in the Dalai Lama’s succession, said Washington-based International Campaign for Tibet (ICT) which had lobbied for the measure with a range of other Tibet campaigners in the country. Other reports said it was approved by a supermajority vote of 392-22. The bill now awaits Senate approval before it could become law.

The Tibetan Policy and Support Act (TPSA) now awaits Senate approval where it was introduced by Senators Marco Rubio (R-Fla.) and Ben Cardin (D-MD)before going for the President’s signature to become law. It is presently before the Senate Committee on Foreign Relations for approval.

It is unlikely to be picked up by the Senate immediately, however, given the upper chamber’s ongoing impeachment trial of US President Donald Trump, noted the scmp.com Jan 29.

Though introduced and voted upon as a stand-alone piece of legislation, the bill serves as an amendment to the Tibet Policy Act of 2002, which codified Washington’s official position of support for the Tibetan people, noted the scmp.com report.

Referring to the significance of the new legislation under process, ICT said the bill:

“Make it official US policy that the selection of Tibetan Buddhist leaders, including a future Dalai Lama, should follow the desires of the Tibetan Buddhist community and the instructions of the current Dalai Lama without interference from the Chinese government.

“Sanction Chinese officials who attempt to appoint their own Dalai Lama in the future. These sanctions could include having their assets frozen and entry to the US denied. The State Department will also have to work at the international level to build support for Tibetan Buddhists’ freedom to choose their own leaders without government interference.

“Forbid China from opening a new consulate in the US until a US consulate is allowed in Lhasa, Tibet’s capital.

“Address water security and environmental issues in Tibet, which is warming at nearly three times the global average and provides water to more than 1 billion people in Asia.

“Formalize funding for humanitarian projects for Tibetans living in Tibet and in exile until at least 2025.

“Commend the Dalai Lama and Tibetans in exile for adopting a democratic system of government.”

Besides, the bill recognizes the Central Tibetan Administration (CTA) as a legitimate representative that reflects the aspirations of Tibetan people around the world and the Sikyong as the Chief Executive of the CTA.

It emphasizes that the six million Tibetans living in Tibet do not have a political representative and renders support to CTA’s Middle Way Approach for resolving the Tibet issue and considers it a ‘genuine demand for autonomy’.

The bill cites “Section 355 of the Foreign Relations Authorization Act, Fiscal Years 1992 and 1993” which recognizes the Dalai Lama and the CTA as the legitimate representative of the Tibetan people, and supports Tibet’s historical status as a sovereign nation with a separate political and territorial identity from China, and acknowledges its distinct national, cultural and religious identity.

The bill also notes that the United States Special Coordinator for Tibetan Issues should continue to maintain close contact with the religious, cultural, and elected leaders of the Tibetan people.

While the issue of human rights in Tibet has generally garnered less attention than protests in Hong Kong and China’s policies in Xinjiang, it is nonetheless a cause that enjoys the long-standing backing of numerous high-profile figures on Capitol Hill, noted the scmp.com report. In particular, House Speaker Nancy Pelosi has been one of Washington’s most vocal campaigners for the protection of civil and religious liberties in Tibet. The Californian Democrat’s numerous meetings with the exiled Dalai Lama, a close friend of hers, have riled Beijing, it said.

If ultimately enacted, the legislation’s efficacy will depend to a large extent on how faithfully, punctually or comprehensively the executive branch chooses to implement it, as is the case with much legislation. In this connection, the scmp.com reported noted that of late, frustration had been growing in Congress over the US administration’s ongoing delay in submitting to lawmakers a report mandated in another Tibet-related bill that was enacted in 2018.

The Reciprocal Access to Tibet Act called on the US government to block the visas of any Chinese official deemed responsible for policies that restricted foreigners’ access to Tibet, and to furnish a list of those officials to Congress. The deadline for that report passed in mid-December.

McGovern has said Jan 28 that he hoped to see the first report from the State Department.