(TibetanReview.net, May11’20) – Apart from north Sikkim there had been an earlier brawl between Chinese and Indian border troops in eastern Ladakh, also resulting in minor injuries on both the sides, according to subsequent Indian media reports. Both the incidents took place along un-demarcated and disputed frontier between the two sides, noted tribuneindia.com May 11.

The report said the incident in eastern Ladakh was much bigger in scale and had wider ramifications than the clash in north Sikkim.

The report cited sources as saying that in the intervening night of May 5 and 6, a clash erupted at a spot called ‘Finger 5’ on the northern bank of the Pangong Tso (lake) in eastern Ladakh. It was one of the spots where pitched battles were fought during the 1962 war.

In 2017, troops had hurled stones at each other near the spot. In the latest incident, troops on both sides received injuries, the report cited a senior official as saying without confirming either the nature of injuries or the number of those injured.

The development was reported to have initially taken place on Apr 27 when the troops came face to face. In the night of May 5 and 6, Chinese troops clashed with Indian jawans at an attitude of 14,000 feet. More than 250 men were involved in the fracas. A meeting of senior commanders was conducted; but matters flared up again today, the report said.

The report noted that Eastern Ladakh had been militarily “tailored” to prevent a repeat of 1962 — when China, with exceptions like Rezang La, literally overran the Indian military defences.

As reported earlier, the clash in north Sikkim had occurred on May 9 and led to injuries to troops, including four from the Indian side. The incident occurred in the ‘Naku La sector’ ahead of Muguthang.

Both the sides have played down the incidents. 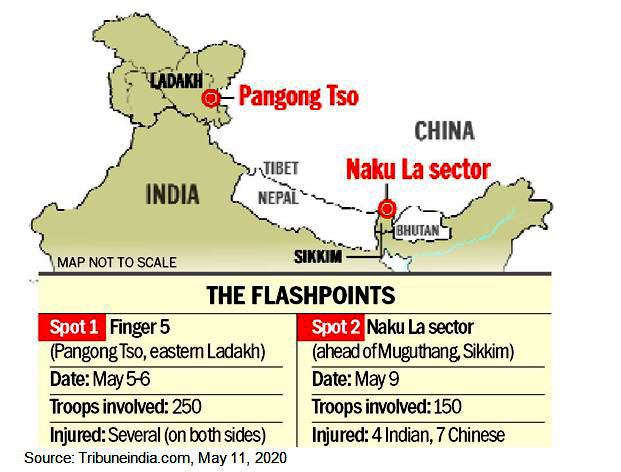