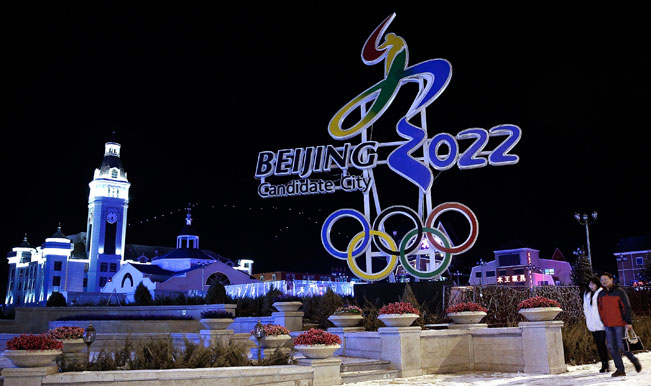 (TibetanReview.net, Aug01, 2015) – Despite vigorous protests from Tibet groups as well as international human rights organizations, the International Olympic Committee (IOC) on Jul 31 approved Beijing as the host of the 2022 Winter Olympics, making it the first city to host both the Summer and Winter Olympic Games. China was, nevertheless, expected to easily win the vote, which was held in Malaysia’s capital Kuala Lumpur, given the fact that it had become a prestige issue for the Chinese government. However, it beat its only rival, Kazakhstan’s Almaty, only by a margin of 44-40, the closest IOC vote in eight years.

Those who opposed Beijing’s bid contended that massive violations of human rights take place both during the preparations for and the hosting of the Games by the Chinese government, citing the example of the 2008 Summer Olympics. After the vote, Chinese President Xi Jinping sent a letter of appreciation to IOC President Thomas Bach on Jul 31 evening, expressing thanks to IOC for its trust and support in selecting Beijing, together with Zhangjiakou, as the host of the 2022 Olympic and Paralympic Winter Games.

Unlike in the run-up to its bid for hosting the 2008 Summer Games, China did not make any human rights promise, which it does not keep anyhow, this time.

The International Tibet Network, which represents Tibet campaign group around the world, has accused the IOC of sending the wrong message to the wrong people at the wrong time. It said: “China wants the world to ignore its deteriorating human rights and be impressed by Chinese can-do pragmatism instead. … Whatever the IOC wants or says, the message heard loud and clear in Beijing is that human rights and Tibet don’t matter. The honour of a second Olympic Games is a propaganda gift to China when what it needs is a slap in the face.”

The group staged a protest the same day outside the IOC headquarters in Lausanne over the decision to give Beijing the right to host the Games.

Also, Washington-based International Campaign For Tibet said: “Both the International Olympics Committee and the Beijing Olympics Committee highlighted the potential positive impacts the 2008 Olympics would have on Chinese society, but today we know that there has only been increased trampling of human rights in China generally and in Tibet specifically in the post-2008 period.”

The group accused the IOC of being in violation of the Olympic Code of Ethics with its 128th session decision, saying: ‘Safeguarding the dignity of the individual is a fundamental requirement of Olympism’ while the (Olympic) Charter aims to put ‘sport at the service of the harmonious development of man, with a view to encouraging the establishment of a peaceful society concerned with the preservation of human dignity.’”

Before the vote, Kazakhstan’s Prime Minister Karim Massimov had urged voting global IOC members to make a fearless choice rather than one which will make them sleep easier at night. Almaty was widely considered to be better placed to host the Games, with its better snow cover and with all its venues being within a 30-kilometer (18-mile) radius of the city. Beijing, with its venues scattered over long distances, is expected to require the creation of artificial snow covers for hosting the Games.