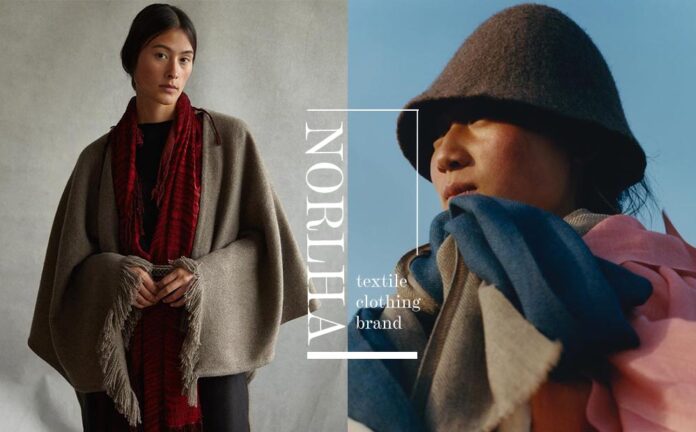 (TibetanReview.net, Jan06’22) – Norlha Atelier, a luxury brand founded by a Tibetan-American woman featuring hand-woven, sustainable yak fur products, has been forced by online criticism in China to stop listing its stores in the ‘Tibetan Plateau’ region separately from those in ‘China’ and other parts of the world. The brand is located in a historically Amdo Tibetan village that is now part of China’s Gansu Province.

The online criticism apparently began after China’s official Global Times daily noticed Jan 5 morning that the brand’s official website Norlha had divided its stores across the world, based on geographical location, into “Europe,” “Tibetan Plateau,” “China,” “Japan” and “Online.”

The brand had faced sharp criticism in China for listing out stores located in the Tibetan Plateau, including the provinces of Gansu, Yunnan, and Tibet Autonomous Region, separately with stores in the rest of the country, reported the globaltimes.cn Jan 6.

And on Jan 5 afternoon, the stock list on the Norlha website was seen to have been changed – It had removed the category of “Tibetan Plateau” and integrated it into that of “China,” the report noted, adding it was waiting for a response from the brand to its inquiry.

It noted that some netizens on China’s Twitter-like social media platform Sina Weibo had lashed out at the brand’s listing of the Tibetan Plateau separately from China. “It is hard to believe that it [the brand] was unintentional, and it also showed just how much ethnic separatism has soaked through people’s lives,” it quoted one netizen as writing.

It added, however, that other views were also expressed, saying the categorization was not meant to irritate the Chinese audience but to highlight the uniqueness of the products’ origin.

The report noted that the brand’s founder, Dechen Yeshi, 39, born in the US to a Tibetan father and an American mother, had moved to a village in the Gannan (Tibetan: Kanlho) Tibetan Autonomous Prefecture in 2004. Yeshi has said the employment opportunities created by her yak wool workshop have provided local Tibetans a steady source of income and enabled them to invest more in their future without having to move to big cities.

The report acknowledged that other than the controversial stock list, the brand identified its location as “Ritoma Village, Gannan Tibetan Autonomous Prefecture, Gansu, China.”

Gannan, the Chinese rename for Kanlho, was historically part of the traditional Tibetan Province of Amdo (or Domey), much of which now makes up what China calls the Qinghai Province today.

The brand was conferred the “Best of the World” award by B Corp Certification for being among “the top 10 percentile of companies which make the greatest community impact in the world.” Its collaboration partners are said to include Selfridges, Mr. Porter, Louis Vuitton and Egg Trading.