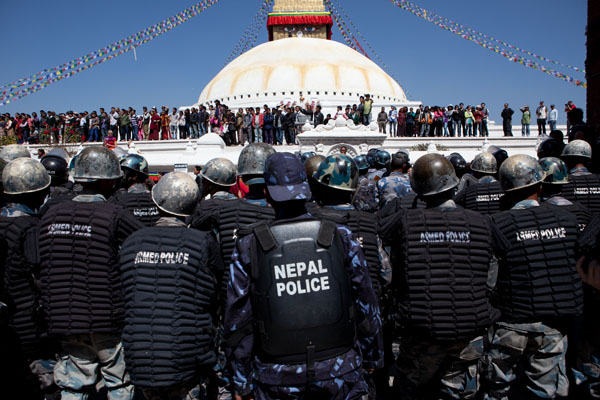 (TibetanReview.net, Mar10, 2015) – Nepal on Mar 8 warned Tibetans against holding any kind of demonstration to commemorate the 56th anniversary of their National Uprising against Chinese rule, explaining that it was committed to Beijing’s “one-China” policy, reported the AFP Mar 8.

Extra security will be deployed on the capital’s streets to shut down any protests, Kathmandu’s chief district officer Ek Narayan Aryal was cited as saying.

“We have told them (Tibetan groups) that such activities will not be allowed,” Aryal was quoted as saying. “It is against Nepal’s commitment to (the) one-China policy.”

Nepal is home to what is believed to be around 20,000 Tibetans, most of them unregistered due to pressure from China. Nepal does not allow Tibetans to engage in any kind of activity, protest or otherwise, that Beijing may consider anti-China.

The report cited Karma Dawa, manager of Kathmandu’s Tibetan Refugee Centre, as saying no protest had been planned due to Nepal’s security crackdown on Tibetans in recent years.