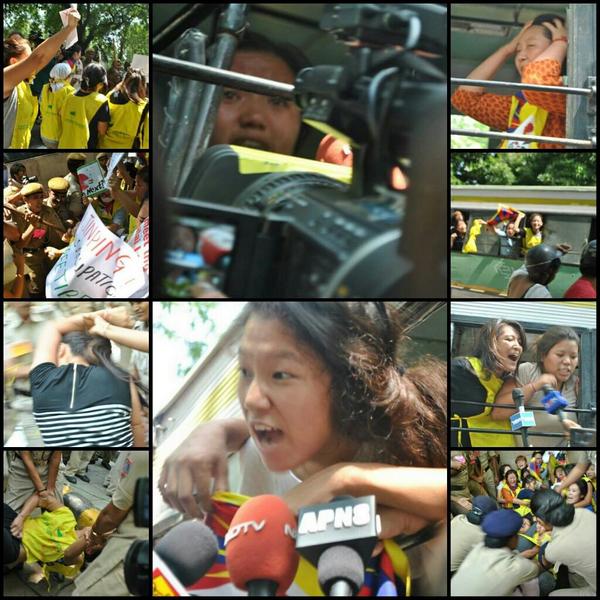 (TibetanReview.net, Sep19, 2014) – Police in the Indian cities of Ahmedabad and Delhi detained a total of more than 100 Tibetans, most of them students, over Sep 17-18 in connection with the visit of the Chinese President Mr Xi Jinping, according to newspaper reports. The single largest number of detentions has taken place in Ahmedabad where Xi landed on Sep 17. “A total of 82 youths were detained in two days, including 20 on Wednesday (Sep 17),” timesofindia.indiatimes.com Sep 18 quoted senior police officials as saying.

Some 27 of them were students from Maharaja Sayajirao University (MSU) who had gathered near IIMA to protest and they were badly beaten by the city police, reported ahmedabadmirror.com Sep 18. The report added that in Vadodara city too, police continued its crackdown on Tibetan students and detained more than 60 girls and boys from various areas near the MSU campus.

Some of the reports highlighted the detention of Mr Tenzin Tsundue, a Tibetan writer and independence activist who has faced several criminal trials in the past for carrying out high-profile protests during Chinese leaders’ visits. He had remained hidden in Gandhi Ashram in Sabarmati where Prime Minister Narendra Modi and Xi were to meet. He had entered the ashram the day before, on Sep 16, but got caught just hours before the meeting and was handed over to the crime branch of the police, the report said. He had planned to confront Xi with leaflets and a Tibetan national flag.

Earlier, on Sep 17, 10 Tibetans were held after they staged a demonstration outside the Chinese embassy in New Delhi. They were among a group of 25 Tibetan Youth Congress activists who took part in the protest, reported hindustantimes.com Sep 18.

On Sep 18, several Tibetans were held after scores of them held a vociferous protest and clashed with police outside New Delhi’s Hyderabad House, the venue for the Modi-Xi talks, reported PTI news agency Sep 18. 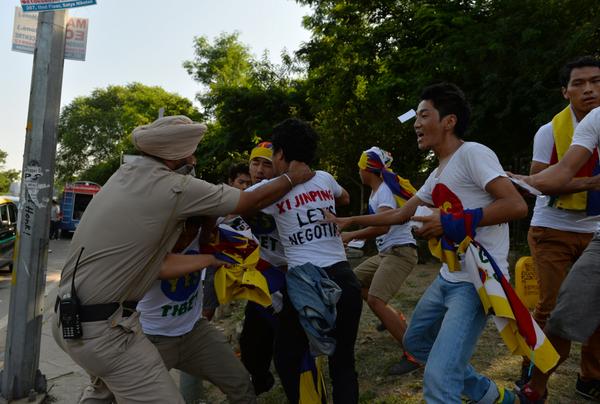 At least eight Tibetans were held as they marched towards the Taj Palace Hotel, where Xi was staying, reported firstpost.com Sep 18.

Tibetan activists also protested near Dhaula Kuan in South Delhi, with one man climbing a TV tower with a Free Tibet flag tied to his waist, reported indiatoday.intoday.in Sep 18. At that time, Xi was laying a wreath at the memorial of Mahatma Gandhi.

Many Tibetans also staged protest at Majnu ka Tila in North Delhi where a sizeable number of them live in a colony.

The above and possibly other protests took place despite the fact that tight security and police blockades had been imposed ahead of Xi’s arrival in New Delhi on Sep 18. At least four companies of the Rapid Action Force (RAF), with around 400 armed personnel, have been deployed outside the Chinese embassy in Chanakyapuri diplomatic enclave, reported firstpost.com Sep 17. Two RAF companies along with Delhi Police officers stood guard at Hotel Taj.

Police personnel in large numbers had been deployed at many places, especially at Majnu-Ka-Tilla, where a law which bans any kind of unlawful assembly was imposed.

Exile Tibetan organizations urged India to take up the Tibet issue with the visiting Chinese leader while the head of the exile administration at Dharamshala, Sikyong Lobsang Sangay, called Tibet a key issue in Sino-India relations and believed “that a strong Sino-Indian relation would be beneficial to the Tibet cause.” He wanted Xi to “lift restrictions imposed on the Tibetan people and ensure that the Tibetan people are granted their rights as enshrined in the Chinese constitution.” And he wanted Xi to “resolve the issue of Tibet through Middle-Way Approach for genuine autonomy for the Tibetan people.” 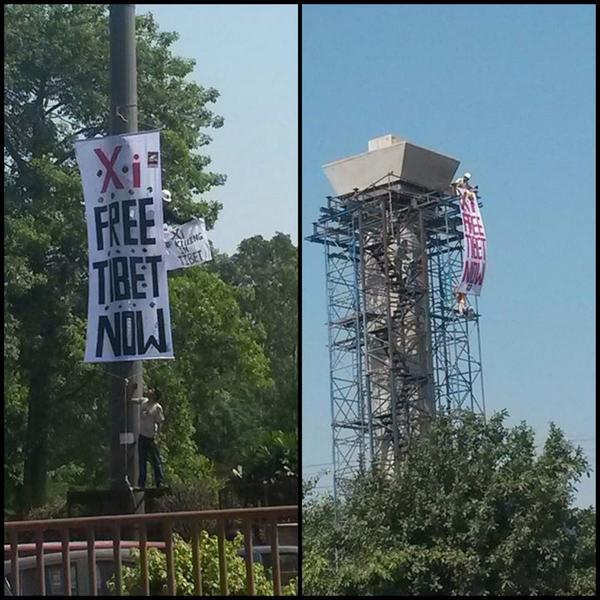 Also, Tibet’s exiled spiritual leader, the Dalai Lama, said that “Tibet’s problem is India’s problem” and needed to be resolved by non-violent means. “Tibet’s problem is also India’s problem. Before 1950, there was not a single soldier on the northern border and it was peaceful. Sooner or later, you have to solve the problem but not by force,” ndtv.com quoted him as saying Sep 18 from Mumbai.

He has described Xi as “more realistic” and “more open-minded” than his predecessor Hu Jintao.

China is India’s largest trading partner, with two-way trade totaling about 65.5 billion US dollars last year. However, China enjoys a huge trade surplus and has failed to relax policies to reduce the gap.