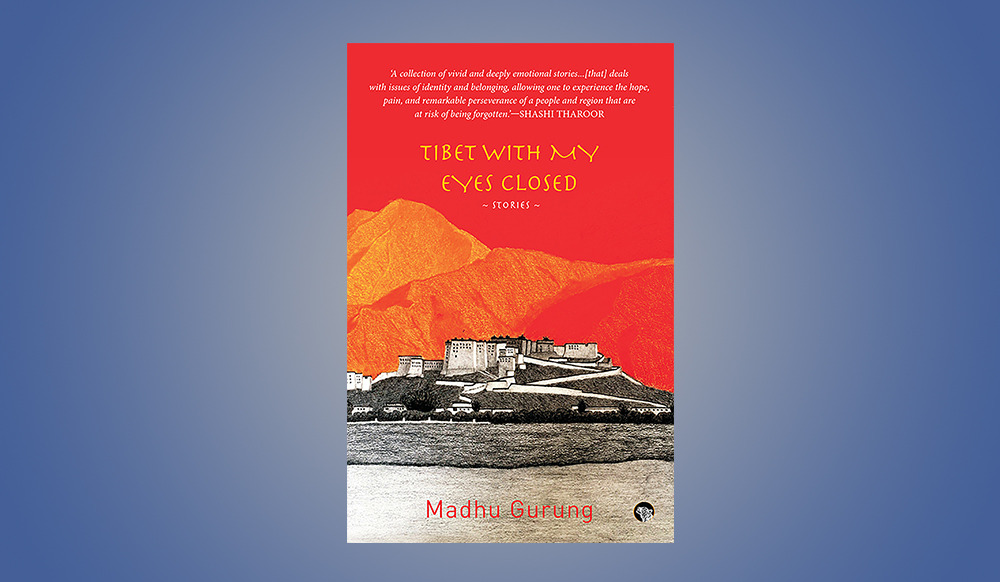 In one of his literary memoirs, VS Naipaul laments the difficulty of writing about societies that are “not organized.” The grand old man of letters was, of course, referring to his community of Trinidad-Indians, who have migrated to the plantation colonies of the West Indies during colonial times.

Similarly, anyone who attempts to write about the Tibetan diasporic community has a difficult task at hand (for they do not lend themselves so easily to sweeping narratives.)

The author has to decide what to keep and what to leave out constantly. The best (or the easiest) approach is often to do a tapestry of stories that would bring alive the larger canvas and the landscape of the society the author is trying to describe.

That is what Indian journalist Madhu Gurung chose to do in her remarkable book about the Tibetan diaspora, “Tibet With My Eyes Closed: Stories” (253pp, Rs 350), published recently by Speaking Tiger Books.

Part oral history, part journalism and travelogue, Gurung succeeds in painting a vivid picture of, as writer Stephen Alter notes in his blurb for the book, the somewhat “rough terrain” that is the Tibetan diaspora.

Any author writing about Tibet must first battle with the elephant in the room (the Chinese occupation of Tibet) but he or she must do so without being repetitive or clichéd, not an easy task.

For Gurung, Tibetan resistance is both a major preoccupation and recurrent motif; with the author devoting several chapters to the story of the Tibetan fighters and their achievements and memories. These include Chushi Gangdruk (Four Rivers, Six Ranges), the CIA-funded Tibetan Resistance Army, and the Special Frontier Force (SFF) in India.

She interviews retired army personnel at the old-age homes in Dharamshala, Dehra Dun and Pokhara, Nepal. The author even travels as far away as Mustang to the Nepal-Tibet border in the “footsteps of the Buddha’s Warriors” to see for herself the old base camps of the Tibetan fighters.

These stories are not new. Yet, Gurung’s novelistic attention to detail and the passion with which she weaves her stories – and her position as outsider-insider that perhaps explains her deep reverence and emotion to her subject – lends great freshness to otherwise seemingly old themes.

The eleven stories in this genre-bending book are divided into the five colours of the Tibetan prayer flag. The book begins with a profoundly memorable story of a reunion between a husband and a wife after many decades, and ends with an equally fascinating and hitherto untold tale – narrated in the first person – about a Tibetan lady and her troubled marriage to a Newari man.

These real stories are laced with the rich details of historical and cultural trappings of the Tibetan community as well as their lifestyle and livelihood.

Gurung, who has formerly worked for media organizations such as BBC and Hindu, also does not gloss over from stories that might seem trivial or not so stereotypical.

“This kaleidoscope of stories,” as writer Namita Gokhale puts it in another blurb for the book, includes slices of Tibetan diaspora from the everyday life. Stories about a former monk-turned-transgender beauty icon as well as an elderly lady who had made a name for herself as a caretaker of stray dogs in the streets of Rajpur, Dehra Dun.

Tibet With My Eyes Closed accurately captures the struggles, pains and hopes of a community at the crossroads. Tibetans are lucky to have found in the author such a skilled and empathetic chronicler of their society.

* TN Khortsa is the author of The Tibetan Suitcase: A Novel (Blackneck Books, 2019)

On Writing the Tibetan Diaspora

The Sun Beaten Poetry: A Review of Burning the Sun’s Braids

The Tibet Factor in India-China Relations