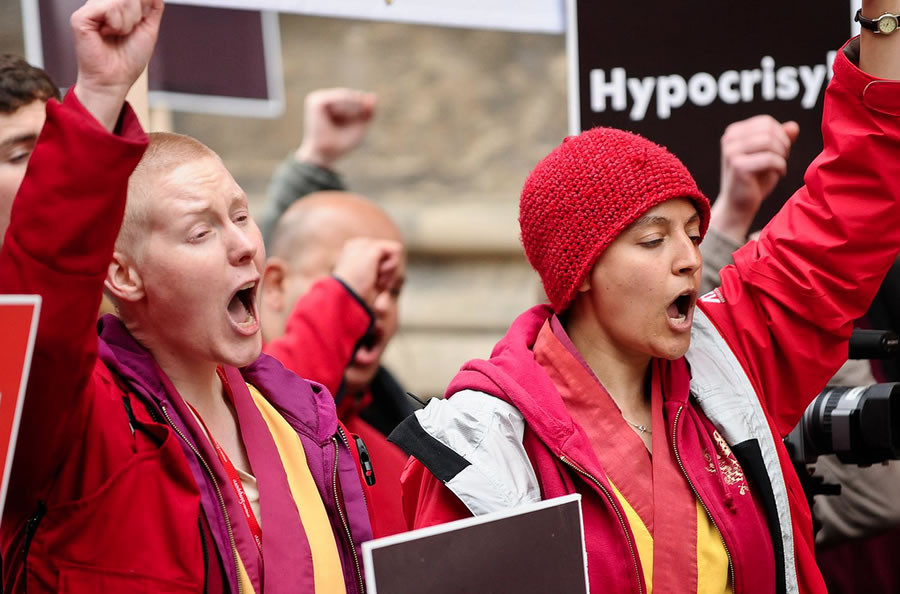 (TibetanReview.net, Nov02, 2014) – Washington-based International Campaign for Tibet (ICT) has on Oct 31 accused members of the “International Shugden Community” of causing great damage to the broader Tibetan issue by trying to undermining the work of the Dalai Lama. Community members, mostly Western followers of some Tibetan Buddhist teachers, have been following the exiled spiritual leader of Tibet during his ongoing visit to the USA and slandering him in protests as well as by infiltrating to try to disturb the audiences at his meetings.

ICT said the Chinese Government looks upon the Dalai Lama as the source of their inability to legitimize their rule in Tibet and had been attempting to sever his connection with the Tibetan people. And the Shugden demonstrators have been contributing to the fulfilment of the Chinese Communist Government’s agenda of undermining the authority of the Dalai Lama with their actions. It accused the Shugden demonstrators of trying to create seeds of discord and confusion among the public by using terms like religious freedom, human rights, etc. to define their issue.

ICT has suggested that if the Shugden demonstrators were genuinely concerned about religious freedom and human rights of the Tibetan people, they would serve the cause better by working to alleviate the plight of the Tibetans in Tibet, rather than focusing on their parochial interest. As regards the Shugden controversy, ICT said it was complex and people needed a deeper understanding of it.

The Dalai Lama has said the 17th century-originated Tibetan spirit called Shugden, also known as Dolgyal, is a malevolent spirit and worshipping it is both un-Buddhist and religiously divisive. While the mainstream Tibetan Buddhists have taken his advice to heart, a few with strong historical ties to it disagree, claim that the Dalai Lama has thereby banned the practice, and accuses the exile Tibetan administration at Dharamshala, India, of discriminating against worshippers of the spirit. Both have denied the accusations and demanded concrete substantiation of the claims.