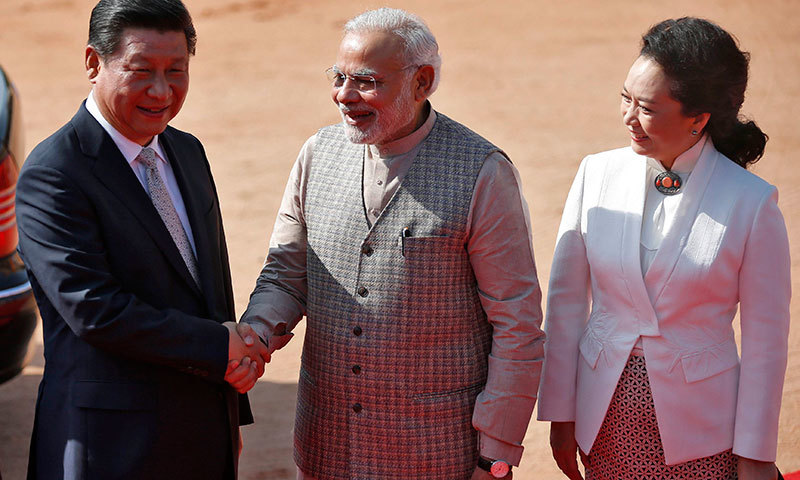 (TibetanReview.net, Sep19, 2014) – While Indian Prime Minister Narendra Modi was going out of his way to welcome and show friendship with Chinese President Xi Jinping who was visiting the country over Sep 17-19, nearly 1,000 Chinese soldiers intruded into India in Ladakh’s Chumar sector on Sep 18 in a further escalation of an already serious border situation, according to Indian newspaper reports.

There was “no concrete breakthrough” in the flag meetings held between the Indian Army and People’s Liberation Army at Spanggur Gap in south-eastern Ladakh on Sep 17, even as additional Indian troops were rushed to another spot in the crucial Chumar sector after “Chinese presence” was detected there as well, reported timesofindia.indiatimes.com Sep 18.

The report noted that the first troop face-off at Chumar was triggered the week before after Indian soldiers prevented 300 PLA troops equipped with cranes, bulldozers and other equipment from building a road right up to Chepzi on the LAC there. It added that the second face-off erupted on Sep 17 after Chinese troops were also spotted in another spot in Chumar around two km away from the first one. As the Chinese troops were refusing to go back, the Indian Army rushed three battalions to the LAC in the sector, the report added.

The report described these Chinese incursions as the worst in recent years.

There is also a “civilian confrontation” going on at Demchok, which took place after China last week moved some of its grazers to the Ninglung Nullah – where they pitched tents – to prevent Indian workers from building a water irrigation channel under the country’s NREGA poverty alleviation scheme.

PM Narendra Modi raised the issue of incursions with Chinese President Xi Jinping during their meeting on Sep 17 and he will do so again today, MEA spokesman Syed Akbaruddin was cited as saying Sep 18.

The report noted that the apparent disconnect between the PLA and the top political hierarchy in Beijing had come to the fore even during the 21-day military stand-off in the Daulat Beg Oldi sector in April-May 2013 after Chinese troops had intruded 19 km into Depsang valley just before Chinese Premier Li Keqiang’s visit to India. “The PLA commanders on the ground and Beijing were speaking in different voices even then,” a source was quoted as saying.