(TibetanReview.net, Aug29’19) – Sogyal Lakar, better known as Sogyal Rinpoche, one of the most prominent Tibetan Buddhist masters living in the West, best known for a long time by his bestseller The Tibetan Book of Living and Dying but whose reputation was badly sullied in recent years by allegations of physical and sexual abuses by some of his disciples has passed away on Aug 28, aged 72. He was reported to be under treatment for colon cancer diagnosed in 2017 and to have died after suffering a “pulmonary embolism”.

The founder and spiritual head of Rigpa, an international network of more than 100 practice centers and groups in 23 countries, wrote his bestseller in 1992 and it was reprinted in 30 languages and published 56 countries. 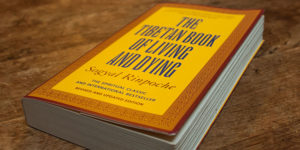 Sogyal Rinpoche began to teach in London in 1974 from his centre, originally called Orgyen Chöling, in Kilburn. In 1979, he chose the name Rigpa—the innermost, essential nature of mind—for his work.

Born Sonam Gyaltsen Lakar in 1947 in Trehor, in the traditional Tibetan region of Kham, Sogyal Rinpoche was a Tibetan Dzogchen lama of the Nyingma tradition of Tibetan Buddhism. He was recognized as the incarnation of Lerab Lingpa Terton Sogyal, a teacher to the 13th Dalai Lama, by Jamyang Khyentse Chokyi Lodro.

His family fled the Chinese invasion of Tibet in 1954 and he was initially educated at a Catholic primary school in Kalimpong, in West Bengal, India. After further education in Delhi, he, in 1971, arrived at Trinity College Cambridge, in Britain, to study theological and religious studies, which he reportedly did not complete.

In 2017, Sogyal Rinpoche resigned as the spiritual head of Rigpa following accusations from students and staff of multiple instances of sexual, physical, and psychological abuse and misconduct, as well as the alleged misuse of funds.

While he did not refute any of the allegations against him, he stated in a letter to the Rigpa community dated Jul 20, 2017, “I am clear in my own mind that I have never, ever, acted towards anyone with a motive of selfish gain or harmful intent.”

Although he was never found guilty of any crimes, an independent investigation by a lawyer commissioned by his group concluded that some followers were abused by him. Besides, in 1994 a woman filed a $10 million lawsuit against him for sexual, mental and physical abuse. The case was settled out of court.

Although his passing was sudden, it was very peaceful and serene, and he was surrounded by close and loving students, said a post on Sogyal Rinpoche’s official Facebook page, which added that several lamas were providing guidance, including Sakya Gongma Trichen Rinpoche.

Plans were stated to be underway by close associates of Sogyal Rinpoche in Thailand and Sri Lanka to organize Theravada chanting ceremonies later on Aug 28. A ceremony was to be held in Wat Thong Noppakhun, a Buddhist temple on the Thonburi bank of the Chaophraya River, in Bangkok.

He has taught Tibetan Buddhism in the Nyingma tradition for 40 years in Europe, the US, Asia, and Australia.