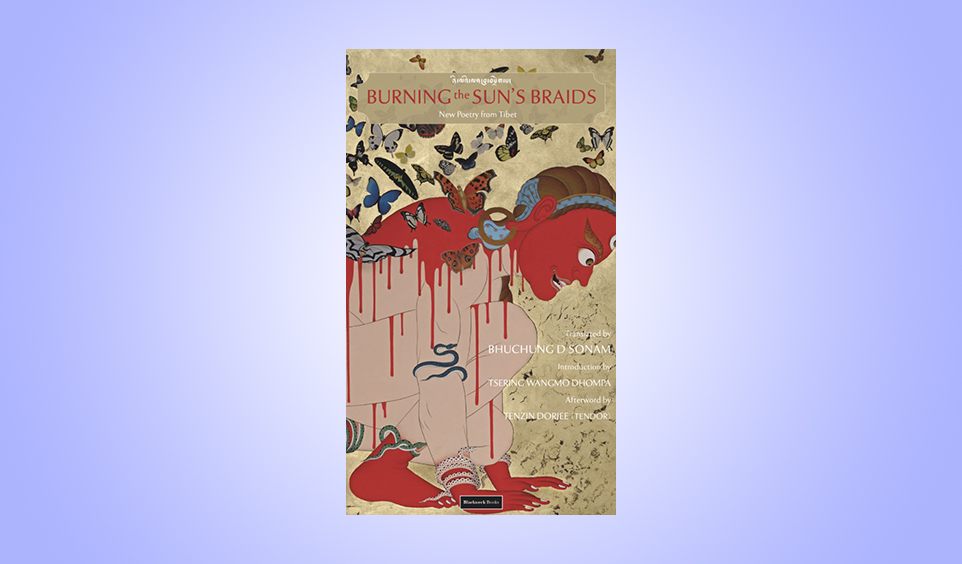 One of the most salient features about the Tibetan landscape is the scorching sun. The Tibetan sun, that burnt gaze sweeping the vast plains, is illuminating, consuming and inescapable. I once spent almost three summer months in Tibet, travelling from Golok to Lhasa to Lithang. I watched Chinese tourists hiding under umbrellas to protect their skin from the sun and felt superior in my Tibetanness, secure in the slow-darkening charge seeping into my skin through to my bones. I knew I probably would not luck into a visa again and felt like I was storing the sun to full capacity in my body, for rationing out in more sunless lands.

It’s not surprising, therefore, that this sun has always been a recurring motif in Tibetan literary and artistic works. In one of my early lessons in Tibetan poetry at the Tibetan Children’s Village school, I remember memorizing the canonical metaphors for the sun. Just in the last ten years, we have had some major works that have paid homage to the Tibetan sun by incorporating it into their titles. Tenzing Sonam and Ritu Sarin’s The Sun Behind the Clouds and Sonthar Gyal’s The Sun Beaten Path come to mind. And now, to join these two films, we have the poet, writer, critic and translator Bhuchung D. Sonam’s newest book.

Burning the Sun’s Braids: New Poetry from Tibet is a powerful translated book of poetry from some of Tibet’s finest and most courageous poets including Chen Metak, Kyabchen Dedrol and Khawa Nyingchak. They have suffered for their courage and their fearless art. Their writing, sharp and precise, read like witness accounts rendered as poetry.

The powerful poem “A Stranger” by Chen Metak depicts an interrogation:

After you go away,
Shutting the door tightly
I will have to cry—
For that person
Whose shadow the moon erased
Whose color the rain washed away
Whose name the crow plucked out,
For people like me, and
For the ownerless who survive outside the door.

In this haunting poem, the poet speaks directly to the interrogator and essentially turns confession, and accusation, into a kind of communion. By doing so, the speaker is able to say things otherwise unsayable, and make the reader complicit and participate in what the interrogator would call a crime, which is the speaking of the truth. Of course, the reader as the listener/interrogator is already complicit; it’s the interrogator’s presence that makes the speaking of the truth a crime. It’s the Catch 22 of culpability. If in content A Stranger can be read as a nod to Camus’ The Stranger (the title could also have been translated as ‘The’ Stranger, as Tibetan has no articles), in form it recalls Browning’s My Last Duchess, one of the more famous dramatic monologues in English poetry. Chen Metak’s dramatic monologue also masquerades as a dialogue, and by so doing, parallels and exposes, even inverts for me, the Chinese narrative, that state imposed monologue masquerading as a people’s dialogue which is the Chinese occupation portrayed as welcome liberation.

As Tsering Wangmo Dhompa wrote in the introduction, “Burning the Sun’s Braids asks to be read against the history of colonial rule. The poems challenge Chinese colonial power by naming the poverty of life under its rule and in refusing the colonized present.”

Here are some lines from Theurang’s poem “Today, I Wish to Offer Three Prostrations towards Lhasa” that no Tibetan will need to have explained:

As Dhompa said, “It is through reminders of a shared history that the poets speak as though to be with the people and to rouse the people to consciousness. In this way the poems are a kind of a revolutionary or national literature.” And writing this kind of poetry is not a safe pastime.

Theurang, one of the editors of the banned journal Eastern Snow Mountain and author of Written in Blood, spent four years in prison. Jado Rinchen Sangpo was arrested and drafts of his book Tears of Hot Blood were confiscated. Nyen was detained for his piece What Human Rights Do We Have Over Our Bodies published in Eastern Snow Mountain and served four years in prison. Gartse Jigme was just released after five years in prison for his books Tsenpo’s Courage vols 1 & 2. As Tenzin Dorjee says in his afterword, “In totalitarian states, poets walk a fine line between print and prison.”

Burning the Sun’s Braids: New Poetry from Tibet is a testament to and from Tibetan poets. TibetWrites and Blackneck Books have published some important books in recent years, including Broken Portraits from Kaysang, a strong yet subtle new voice in Tibetan poetry. Bhuchung’s Burning the Sun’s Braids is among its most important and lasting books. A book of enduring significance, it’s also been a labor of love for Bhuchung D. Sonam.

By carefully selecting and translating this poetry that is largely inaccessible to the majority of Tibetan youth and the English reading world, Bhuchung D. Sonam has done us a tremendous service. When someone has given up their freedom, the least the rest of us, who live in a compromised freedom, can do is to read what they wrote with their names on our lips.

Tenzin Dickie is a writer and translator living in New York City. She is editor of Old Demons, New Deities: 21 Short Stories from Tibet, the first English language anthology of modern Tibetan fiction published in the west.

Book by Dalai Lama on environment set for Nov’20 release