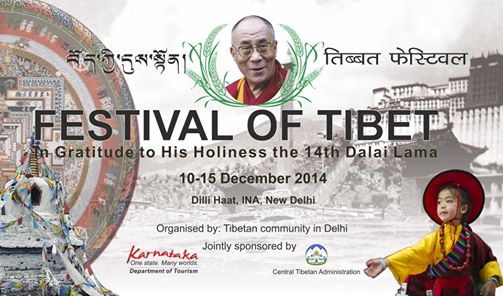 (TibetanReview.net, Dec14, 2014) – A five-day Festival of Tibet opened at Dilli Haat in New Delhi, India, on Dec 10, the 25th anniversary of the conferment of the Nobel Peace Prize on the Dalai Lama. The festival, co-sponsored by Karnataka State Tourism Board and the Central Tibetan Administration (CTA) at Dharamshala, features different aspects of Tibetan culture, including its traditional dance, craft, and art.

The festival is part of the CTA’s celebrations marking 2014 as the Year of His Holiness the Dalai Lama.

Mrs Sheila Dikshit, a former Chief Minister of Delhi, inaugurated the festival in the presence of Mr CG Suprasanna, Joint Resident Commissioner of Karnataka Bhavan in New Delhi; Mr Tempa Tsering, the Representative at the Bureau of HH the Dalai Lama in New Delhi, and Mr Pema Chhinjor, head of CTA’s Department of Religion and Culture.

Those participating in the festival with presentations of their knowledge, skills and products include the Sakya Centre in Rajpur, the Norbulingka Institute from Dharamshala, the Rajpur Tibetan Women’s Centre, the Dekyiling Tibetan settlement and the Tibet Museum of the CTA. Talks are being given on Tibetan Buddhism, Tibetan Medicine and Astrology and Sand Mandala. Documentaries on the Dalai Lama and the Tibet issue are being screened. The Thangtong Lhugar institute from Dharamshala gave traditional Tibetan song and dance presentations.

The Bureau of His Holiness the Dalai Lama and Tibetan Settlement Office, Delhi, jointly organized the festival.