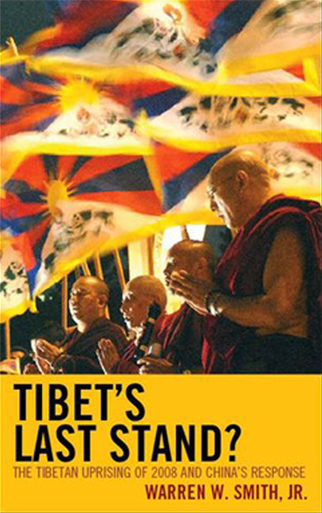 (From Tibetan Review, Feb’10) – Despite heightened international awareness of the situation inside Chinese occupied Tibet – the injustice, human rights atrocities, censorship and widespread erosion of Tibet’s culture, through Beijing’s program of assimilation and colonization – the Tibetan struggle for national and cultural freedom has been a somewhat misunderstood subject. The political objectives and nature of resistance waged by Tibetans, which most dramatically erupted across Tibet during 2008, is occasionally overlooked and sometimes misrepresented.

Yet, as revealed by Warren W. Smith Junior’s Tibet’s Last Stand? The Tibetan Uprising of 2008 and China’s Response, Tibetan national identity (and the incontrovertible fact of Tibet’s right to self-determination and independence) are defining features in the Tibetan resistance to Chinese oppression. With a masterful scholarship he draws upon a range of factual and informed sources (Tibetan, Chinese, human rights organizations, government and media reports) providing a remarkably detailed and moving insight into the courageous and inspirational actions of Tibetans who faced bullets, torture and prison to challenge China’s illegal occupation.

Warren W. Smith Jr. deploys a formidable array of evidence, and, with superb understanding and analysis, records the brutal consequences of the Uprising which was visited upon Tibetans through China’s bloody response. He documents the catalogue of terror and abuse which followed. A monsoon of violence, censorship, racism, control and propaganda worthy of Nazi-Germany or Stalinist Russia, designed to crush Tibetan dissent and secure preparations for the Beijing Olympics. An event which, as richly demonstrated by the author, permitted Beijing an opportunity to reassert its bogus claims over Tibet, manipulate international opinion through a range of propaganda distortions, and enabled further pressure to be exerted upon an Exiled Tibetan Government desperate to facilitate negotiations with China. All of which is masterfully scrutinized by the author who sheds an enquiring and revealing light upon the tortuous and futile attempt by the exiled Tibetan Administration to appease Beijing in exchange for so-called meaningful autonomy.

What emerges throughout this book, apart from Warren W Smith Junior’s obvious credentials and expertise as a pre-eminent authority, writer and researcher of Tibetan political history and its place in terms of international law, is the unyielding spirit of freedom in Tibet, which refuses to be crushed. The solid fact that, notwithstanding China forcefully denying Tibetan sovereignty, Tibet retains the right to self-determination and is a distinct culture and nation, albeit under occupation. Not surprising therefore that he considers Tibet’s national and cultural identity as constituting key territory in current and future efforts to resist what may appear an inevitable decline into obscurity under communist Chinese domination.

The author has added another meritorious achievement to his already formidable literary output on Tibet. In examining the struggle for Tibet’s national and cultural survival he has composed a fascinating and thorough assessment. The detail, political reasoning and depth of knowledge prove compulsive reading and he is to be congratulated for assembling such an extensive account of the Tibetan National Uprising of 2008 and its political and human consequences. In articulating and determining the key issue of Tibetan nationalism, and exploring the nature and objectives of Tibetan resistance, it is a unique publication, informed and enriched by an author with genuine understanding of the issues. Featuring a wealth of meticulously researched material, it offers fresh information and a scholarly perspective, to reveal what was a remarkable demonstration of national and cultural opposition to the oppression and injustice of Chinese rule.

By way of introduction the author refers to The Battle of The Little Big Horn in which the US Cavalry, led by one Colonel Custer, was surrounded and massacred by an alliance of Sioux and Cheyenne Indians in 1876, an event which marked the end of indigenous resistance to the relentless expansion of ‘development’ westwards. As the book notes, though sharing some features, the analogy with the Tibetan struggle for freedom and nation is neither appropriate nor accurate. Unlike the various groupings of Indians across the United States, Tibetans though possessing differing dialects share many features that define a people: common language, religion, culture, history, and system of government. Moreover, unlike Sitting Bull and Crazy Horse, Tibetans have an informed, educated and politically motivated Diaspora to champion their cause, promoting Tibetan freedom and opposing the distortions and propaganda of China’s bogus claims over Tibet. The author considers that exiled Tibetans may provide a true rendering of Tibet’s history and maintain, against the disheartening reality of Chinese occupation, Tibetan national identity.

While the subject matter and academic practice demand realism and objectivity to permeate the pages of this definitive account, the reader departs the last page hoping for something more. Perhaps it’s a romantic hope that a resistance, beyond the tragic heroism of the Little Big Horn, can occur within and beyond Tibet. That the selfless courage and sacrifice which defined Tibet’s National Uprising of 2008 is not a last stand, but a defining and inspirational event that will invest current and future Tibetan generations with a determination to maintain the fires of freedom and independence.

Tibet‘s Last Stand? The Tibetan Uprising of 2008 and China‘s Response is required reading for anyone wishing to obtain an informed and factual understanding of the Tibetan issue, the political aspirations of the Tibetan people, or the rampant nationalism which defines the Chinese regime, its machinery of oppression and propaganda, and its merciless occupation of Tibet. Thoroughly captivating, it is a definitive reference from the foremost writer on Tibetan political history. Inspirational, at times heartbreaking. it is always informed and written in an accessible and lucid style. This publication will appeal to anyone interested in human rights, justice, and freedom for the people of Tibet.
——————-
* JEFF BOWE is the UK Correspondent of Tibetan Review.