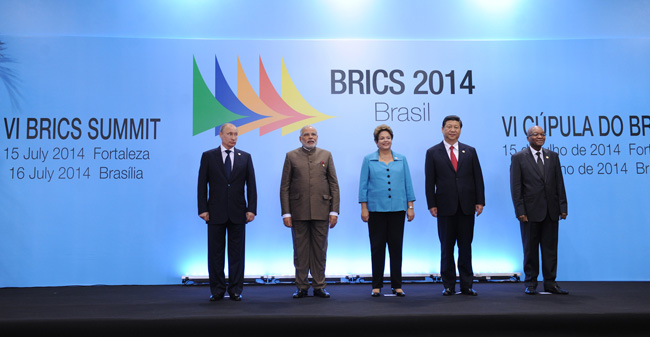 (TibetanReview.net, Jul17, 2014) –India generally never had the leverage or a policy of prioritizing human rights in its diplomatic dealings with China. So also is the case with BRICS, of which China is a part. However, this has not prevented the Tibetan parliament in Exile at Dharamshala, India, and non-governmental Tibetan and Tibet groups from urging the Indian Prime Minister, Mr Narendra Modi, to include Tibet in his discussions with Chinese President Xi Jinping during their meeting Jul 15 on the sidelines of the sixth BRICS summit at Fortaleza, Brazil.

The groups have also indicated that they wanted the Tibet issue to be discussed during the BRICS summit itself.

While noting that the Xi-Modi meeting had taken place the day before, the exile Tibetan administration at Dharamshala said on its Tibet.net website Jul 16 that the exile parliament hoped Mr Modi would discuss the long pending Tibetan issue with China’s at the ongoing BRICS summit.

Likewise, the Tibetan Women’s Association, the Gu-Chu-Sum Movement of Tibet representing former political prisoners under Chinese rule, Students for a Free Tibet-India and Bharat Tibbat Sayog Manch, issued a joint statement, accusing Xi of continuing past policies that have only worsened the situation in Tibet and calling on the international community to “ensure the serious political situation in Tibet is addressed” by diplomatic means.

“BRICS leaders must stop hiding from the truth about China’s brutal repression of the Tibetan people, and recognize that by acting collectively, courageously and with principle, they can help Tibet, and resolve one of the world’s longest-standing injustices,” said Jyotsna Sarah George, Students for a Free Tibet, India, at a joint press conference.

The International Tibet Network, an umbrella body representing Tibet campaign and advocacy groups across the free world, also submitted appeals to all the five leaders of the BRICS countries.