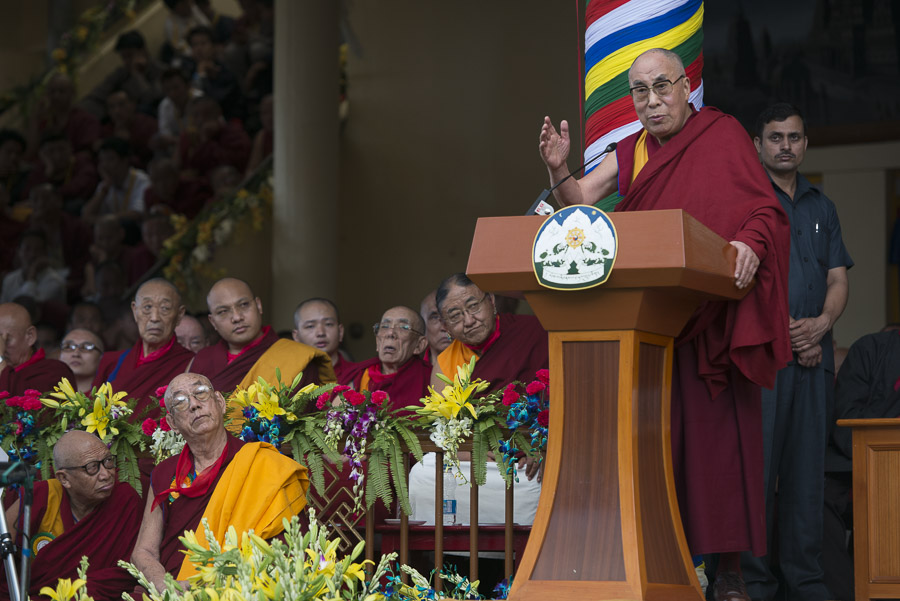 (TibetanReview.net, Jun22, 2015) – Tibetans marked the 80th Tibetan-calendar birthday of their spiritual leader, the Dalai Lama, on Jun 21 (which corresponded to the 5th day of the fifth Tibetan month) with a grand long-life prayer offering at the main Buddhist temple at Dharamshala, India, to be followed by two more days of festive gatherings and events. Top Tibetan religious leaders took part in the long-life offering which was led by the Sakya Trizin and organized jointly by the exile Tibetan administration, the Amdo people and the Gelug International Foundation, the umbrella organization which represents the Gelug tradition of Tibetan Buddhism.

The chief guest was Dr Mahesh Sharma, India’s Minister of Culture and Tourism and Minister of State for Civil Aviation. He offered his best wishes and prayers on behalf of 1.25 billion Indians. India’s Minister of State for Home Affairs, Mrr Kiren Rijiju, a special guest, also offered public greetings to the Dalai Lama, as did the Chief Minister and tourism minister of Arunachal Pradesh Mr Nabam Tuki and Mr Pema Khandu respectively. Tuki invited the Dalai Lama to visit the state again, which the latter acknowledged in his brief address. He also presented to the Dalai Lama a memento and a citation to express his government’s deep devotion.

A message from Chief Minister Mr Pawan Kuman Chamling of Sikkim was also read by his representative. Profuse public greetings were also offered by Mrs Viplove Thakur, an MP to the Indian parliament from Himachal Pradesh.

In his address at the long-life offering, the Dalai Lama expressed gratitude for the offering and said he felt confident, being in good health and as affirmed by his doctors, that he would live for at least another 20 years. He said the best offering to him would be to be sincere in carrying out his advices, for, being a monk, he had no need for offerings of material gifts for his birthday.

And in his address at the birthday function, the Dalai Lama described himself as a human being like any other, susceptible to decline in bodily and sensory functions. He said the important thing was not to look up to him for miracles, despite all the praises that had just been heaped on him, but to pay good heed to his advices about being a good human being and being a discerning Buddhist.

The leaders of the different religious traditions of Tibet offered video-recorded greetings to the Dalai Lama, expressing gratitude for his leadership and his contributions to the Tibetan people in their decades-long trying times in exile. The videos were played over websites and television channels.