(TibetanReview.net, Jul09, 2017) – Tibet campaign groups have expressed outrage at the UNESCO’s decision Jul 7 to include the Tibetan territory of Kokoxili (Chinese: Hoh Xil), as a World Heritage site on an application by China, thereby legitimizing Beijing’s move to destroy the centuries old Tibetan culture and nomadic way of life in that vast region in Yushu (Tibetan: Yulshul) Prefecture of Qinghai Province. Washington-based International Campaign for Tibet (ICT) said Jul 7 the approval contravenes values and guidelines of the international cultural body itself.

ICT has pointed out that the nomination of Hoh Xil – Achen Gangyap in Tibetan – contravenes fundamental principles and values including the concepts of “FPIC” (free, prior and informed consent) and UNDRIP (UN Declaration on the Rights of Indigenous Peoples) which are recognized in UNESCO Operational Guidelines.

The approval was given by the UNESCO World Heritage Committee at its 41st session in Krakow, Poland. 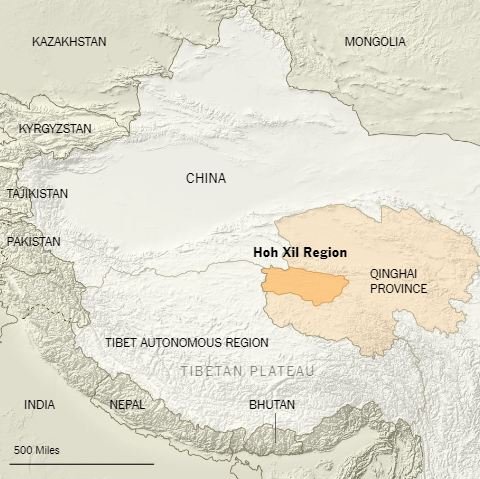 ICT said members of the Committee representing different governments spoke one after another to praise the Chinese government over the nomination despite its representative Ms Tenzin Choekyi having spoken to them about the dangers of approving it in its current form.

ICT said it had earlier made submissions to the Committee members about the threats the nomination posed to Tibetan nomads. This led the Chinese government to present a statement to the UNESCO, committing to “fully respect the will of the local herders and their traditional culture, religious beliefs, and lifestyle”.

But Kai Mueller, Executive Director of the ICT in Germany, has pointed out: “China has a long record of relocating Tibetan herders and violating their rights. UNESCO has supported without question this nomination, which emerges from policies that exclude normal Tibetan land use such as nomadic herding, situate the state as the sole agency of control, and encourage mass tourism, despite clear guidelines underpinning the World Heritage Convention.”

He felt that “the decision to go forward with this nomination without any amendments or fuller assessment reveals more about the political considerations of members of the Committee than a genuine concern for protecting natural and cultural heritage for the world.”

In this connection, Mueller has also pointed out: “The Committee ignored the reality that Tibetans – and nomads in particular – are stewards of the landscape whose role is essential to sustaining the wildlife, the long-term health of the ecosystems, and the water resources that China and Asia depend upon.” He vowed to seek to hold the relevant international bodies to account in order to rigorously scrutinize the consequences and impact on the ground of this decision.

New York-headquartered Students for a Free Tibet (SFT) said UNESCO’s approval had given China the green light to continue with its plan to forcibly remove Tibetan nomads off their traditional lands and, ultimately, wipe out this ancient way of life.

“UNESCO is supposed to uphold and safeguard the world’s culture, but this shameful decision will do exactly the opposite and will ultimately assist China in denying Tibetans their fundamental rights,” said Pema Yoko, SFT’s Executive Director, Jul 7.