(TibetanReview.net, May31, 2018) – Tibetan Buddhists continue to be in a very difficult situation under China which remains a “very troubling” country on religious freedom, US Ambassador-at-Large for International Religious Freedom Mr Sam Brownback has said May 29. The occasion was the release of the US state department’s International Religious Freedom Report 2017 during which he was joined by Secretary of State Mike Pompeo.

The report refers to a wide range of violations of religious freedom in China and other territories under Chinese rule, including Tibet. “Situation for Tibetan Buddhists that continues to be a very difficult situation for them … for Christians, for Falun Gong practitioners. China remains a very, very troubling country on religious freedom,” the Ambassador was quoted as saying during a news conference in Washington, DC.

The report notes that there were six reported self-immolations in Chinese ruled Tibet last year even as authorities continued to block information about the number of self-immolations of Tibetan Buddhists, including Buddhist monks. 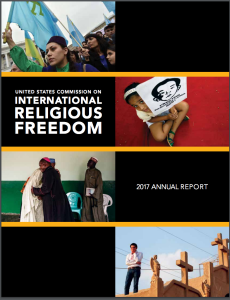 The report says Tibetan Buddhists were not free to venerate the Dalai Lama openly. “While there is no public law expressly forbidding it, authorities view as suspect any display of the Dalai Lama’s photo by businesses or individuals and treat those seen as loyal to him as a separatist threat,” the report said.

The report also talks about China’s demolition of Yarchen and Larung Gar Buddhist academies and the subsequent eviction of 11,500 monks and nuns in Karze Prefecture of Sichuan Province. It also highlights China’s subjection of Tibetan Buddhist monks and nuns to ‘patriotic re-education’, the official denigration of Tibetan spiritual leader His Holiness the Dalai Lama, societal discrimination encountered by ethnic Tibetans, travel restrictions imposed on Tibetan monks and nuns for pilgrimages, etc.

It says the repression increases around politically sensitive events and religious anniversaries such as His Holiness the Dalai Lama’s birthday.

The report notes that in Feb 2017, authorities in Xinjiang defined 26 religious activities, including some practices of Islam, Christianity, and Tibetan Buddhism, as illegal without government authorization. These regulations, which came into force on Apr 1, stipulated that no classes, scripture study groups, or religious studies courses may be offered by any group or institution without prior government approval.

The report notes that forced disappearance, physical abuse, prolonged detention without trial, and arrests of individuals due to their religious practices remain common. It also reports increased repression around politically sensitive events and religious anniversaries such as His Holiness the Dalai Lama’s birthday in Tibet.

The State Department brings out the annual report in compliance with the International Religious Freedom Act of 1998, which lays down US policies to promote religious freedom around the world.