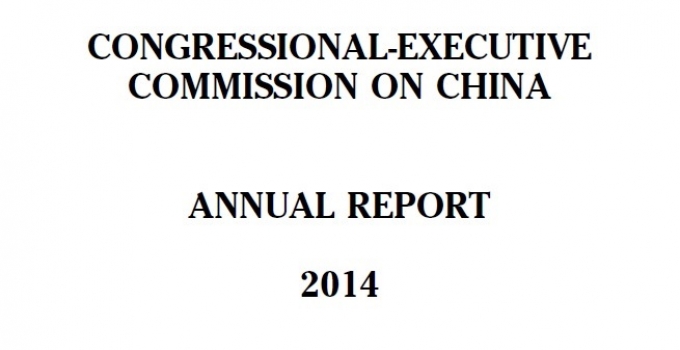 (TibetanReview.net, Oct12, 2014) – There was an increase in harsh security and punitive measures, with China showing no willingness to reexamine policies toward Tibetans that deny them their cultural, religious, and linguistic rights, said the United States Congressional-Executive Commission on China (CECC) in its latest annual report which was released on Oct 9. The report for 2014, which covers the period from autumn 2013 to autumn 2014, is also critical of Chinese leaders’ refusal to engage in dialogue with representatives of Tibet’s exiled spiritual leader, the Dalai Lama.

The report calls on the US Congress and Administration officials to urge “the Chinese government to resume contact with the Dalai Lama or his representatives and engage in dialogue without preconditions.”

The report also recommends that the Congress and Administration officials “Stress to the Chinese government the importance of respecting and protecting the Tibetan culture and language.” It asks that the Chinese officials be urged to “promote a vibrant Tibetan culture by honoring the Chinese Constitution’s reference to the freedoms of speech, association, assembly, and religion, and refraining from using the security establishment, courts, and law to infringe upon and repress Tibetans’ exercise of such rights.”

The report notes that the frequency of self-immolations in Chinese ruled Tibet declined sharply after increase in Party and government security and punitive measures. The commission regrets to note, however, that it has observed no sign that Party and government leaders intend to respond to Tibetan grievances in a constructive manner or accept any accountability for Tibetan rejection of Chinese policies.

On the question of increased security and punitive measures, the commission report notes that collective punishments were imposed to deter Tibetans from self-immolating; high pressure was brought on Tibetan Buddhists to accept Communist Party and government control of religion; the party leadership continued to characterize the Dalai Lama as a threat to Tibetan Buddhism’s “normal order” instead of as a principal teacher, urging that he be “separated” from the religion and the title “Dalai Lama”; and that a total of 60,000 party cadres were deployed in every Tibet Autonomous Region (TAR) village, monastery, and nunnery by Mar 2012, nearly triple the 21,000 initially reported, to exercise further control over them.

The report notes, with named examples, that Chinese officials detained, imprisoned, or beat to death a number of monastic leaders, interfered with identifying a reincarnation, and imposed a ban on travel for religious purposes to Mount Kailash in eastern Tibet.

On one of the core issues underlying the Tibetan reasons for self-immolations, the report notes that while claiming to “protect by law” the learning and use of Tibetan language, Chinese officials closed non-government-run programs and detained Tibetans who promoted use of the language.

The report says that as of Sep 1, 2014, the Commission’s Political Prisoner Database contained records of 639 Tibetan political prisoners believed or presumed to be currently detained or imprisoned. Of them, 621 are records of Tibetans detained on or after Mar 10, 2008; that 44 percent of the total are Tibetan Buddhist monks, nuns, teachers, or tulkus.

The commission’s list of recommendations also includes encouraging the Chinese government to respect the right to freedom of movement of Tibetans who travel domestically, including for the purpose of visiting Tibetan economic, cultural, and religious centers, including Lhasa; to provide Tibetans with reasonable means to apply for and receive documents necessary for lawful international travel; to respect the right of Tibetan citizens of China to reenter China after traveling abroad; and to allow access to the Tibetan autonomous areas of China to international journalists, representatives of non-governmental organizations, representatives of the United Nations, and US Government officials.