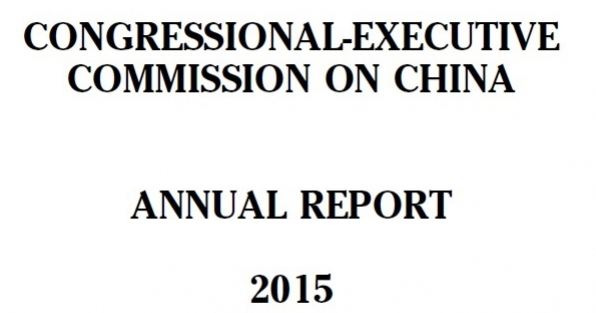 (TibetanReview.net, Oct11, 2015) – Trashing China’s oft repeated claims in their successive white papers that Tibetans had becomes masters of their country under its rule, the Congressional-Executive Commission on China (CECC) of the US has said Oct 8 that Beijing is in continuous denials to Tibetans adequate rights to protect their culture, language, religion, and environment. Releasing its annual report for 2015, CECC has said it had “observed no evidence during its 2002 to 2015 period of reporting that the Party or government solicited systematic or representative input from the Tibetan population on economic development in the Tibetan autonomous areas of China.”

The report says the United States government should stress to the Chinese government the importance of respecting and protecting the Tibetan culture and language.

China claims that it implements in Tibet a development model of “Chinese characteristics with Tibetan traits” that effectively boosts economic growth and household income. And the CECC has noted reports indicating “unprecedented consequence to the pace and scale of economic development and urbanization on the Tibetan plateau, and to Tibetans living there.” However, it adds, “At the same time, officials deny Tibetans adequate rights to protect their culture, language, religion, and environment.”

Given this situation, the CECC report recommends to Members of the US Congress and Administration officials to urge “the Chinese government to resume contact with the Dalai Lama or his representatives and engage in dialogue without preconditions.” And it adds: “A Chinese government decision to engage in dialogue can result in a durable and mutually beneficial outcome for the government and Tibetans that will benefit local and regional security in coming decades.”

The report also calls on US lawmakers and government to encourage “the Chinese government to take fully into account the views and preferences of Tibetans when planning infrastructure, natural resource development, and settlement or resettlement projects in the Tibetan areas of China.”

The report also encourages the US Government to urge China to respect the freedom of movement of the Tibetan people and also to allow access to Tibet for international journalists, representatives of NGOs, the UN, and US Government officials.

The CECC was established by Congress in 2000 to monitor China’s compliance with international human rights standards, to encourage the development of the rule of law in the PRC, and to establish and maintain a list of victims of human rights abuses in China. The Commission is made up of nine Senators, nine members of the House of Representatives and five senior Administration officials appointed by the President.