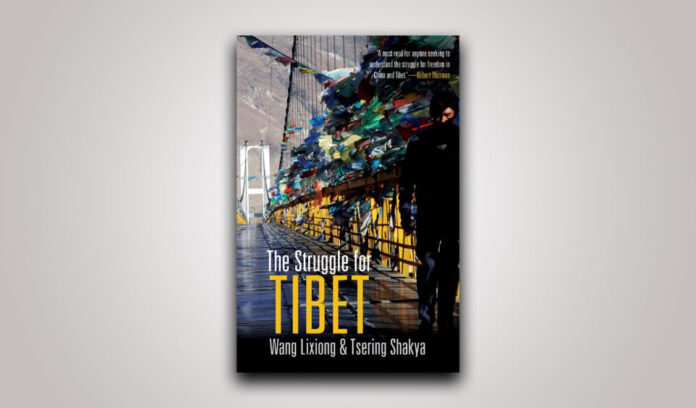 (From the print edition of Tibetan Review, May 2010)

THE STRUGGLE FOR TIBET
by Wang Lixiong and Tsering Shakya
(Introduction by Robert Barnett)
Verso, London and New York, 2009
pp. 280; £ 8.99

The Struggle for Tibet” presents the views of two well-known thinkers. It is structured as a dialogue between Wang Lixiong and Tsering Shakya, which can be viewed as the prototype of a possible dialogue of Chinese government representatives with the Dalai Lama, or indeed as a dialogue between the Chinese and Tibetan peoples. In this dialogue there is a genuine attempt on Lixiong’s part to understand Tibetan perceptions and the mistakes committed by the Chinese with regard to Tibet.

Wang is one of the few Chinese writers who got interested in understanding the nationality question in China and spent many years studying the situation of Tibet and Xinjiang. Over the years his understanding of the national question in Tibet underwent some changes, which happened in response to critiques of Tibetan intellectuals, including of his wife Woeser, who “introduced him to Tibet’s emotional world, inaccessible through research alone.” As a democracy activist Wang has also produced two books of political theory, “Dissolving Power: A Successive Multi-level Electoral System” (1994) and “Bottom-Up Democracies” (2006), in which he has presented his vision of democratic reform of China’s bureaucratic-autocratic political system. At the moment he and Woeser are under house arrest in Beijing for their support of the Dalai Lama and his demand for genuine autonomy for Tibet expressed along with other intellectuals in a letter to the government in 2008. (A petition released by Wang and 300 other Chinese intellectuals and writers in March 2008 is appended in the book).

The first chapter is Wang’s essay, “Reflections on Tibet” [written in 1998, but published in English in 2002 in New Left Review (NLR)]. The response to this article by Tsering Shakya “Blood in the Snows” was also published in a subsequent issue of NLR and forms the second chapter of the book. In it Shakya critiques some of Wang’s assumptions as deriving from a colonialist approach to the Tibetan issue. One of them is the proposition that the Tibetan people were active participants in the destruction of their own Buddhist culture because of the class line approach taken by Mao. Unless it is understood that destruction of temples etc. during the Cultural Revolution (CR) was performed by people with “bayonets at their back” it becomes difficult to comprehend how the same people rushed to rebuild them during the ‘reforms’ era later. According to him, however much the peasants welcomed the land reforms and abolition of feudal labour services the CCP’s anti-religious policy antagonised them. This antagonism has surfaced time and again, and the Buddhist religion still represents a nationalist challenge while Communist ideology, which was imposed from above by the Han Chinese, has lost its appeal.

The next section of the book “Analyses” contains two articles: “Two Imperialisms in Tibet” (2004) and “The End of Tibetan Buddhism” (2003) by Wang Lixiong. A shift is visible in his position and he now begins to critique Chinese cultural imperialism towards minority nationalities. His perception of Tibetan Buddhism has also undergone a change. In “Reflections on Tibet” he had traced the intense religiosity of the Tibetans to their terror of the difficult natural environment. Now he realises the positive aspects of Tibetan Buddhism that serve to protect the fragile ecosystem in the Tibetan Plateau from human savaging and destruction for the sake of commercial gain. He therefore suggests that rather than treating Tibetan Buddhism, and religion generally, in a hostile way the Chinese government can use it as a cost effective method to conserve the environment and preserve social stability.

But Wang also concedes that Tibetan Buddhism cannot be viewed purely pragmatically from the point of view of its social or ecological utility. It is a completely independent system and its main concern is with the transcendent. Different figures and institutions within it play different roles in a complex whole leading to the transcendent, and it cannot or should not be modified or appropriated by forces external to it. Only genuine freedom to Tibetans to practise their culture and tradition would be appropriate and possibly stem the deterioration that is happening in their religious philosophy and practice. “Rather than expecting long term stability to be achieved through economic growth, we should see how economic growth can be transformed by religious belief. Otherwise a crisis is imminent” (p. 189). In fact, Wang is of the view that Buddhism can be made productive in China also as a spiritual resource for reorganising society.

The third section pertains to the 2008 protests which, as Shakya says in an interview with him, involved groups across Tibetan society and across geographic regions. Only in the case of Lhasa the protests took on the form of ethnic conflict. Otherwise the demonstrations were expressive of a unified Tibetan identity that had coalesced due to Chinese government policy since the 1980s of suspecting Tibetans’ loyalty to China and not allowing any dissenting voices whatsoever. He thinks the Chinese government is making a mistake when it equates such expressions of Tibetan identity as separatism and deals with them as such.

On the other hand, Wang Lixiong in “Independence after the March Incident” opines that the protest incidents showed that the issue of independence is a strong one among Tibetan people and also concludes, like Shakya, that it is Chinese imperialism canalised through ‘anti-separatist’ institutions within the government bureaucracy that is responsible for the Tibetans’ assertions. It is this self-serving bureaucracy that is ruling China. Even Mao, though he tried through the CR, could not overthrow this power. He could not do without the CP and he could not do without a bureaucracy. Genuine power for the people bottom up could not be realised. In the post-Mao era the bureaucratic institutions have achieved the capacity to guard against official purges and block any line struggle. Top CCP leaders are no longer in a position to command the bureaucracy but are its coordinators and spokespersons. They can get its support only by maximising its interests. They themselves have been part of the bureaucracy and have climbed up rung by rung. From a revolutionary party the CCP has degenerated into a power bloc and it is now bereft of any ideology but of sovereignty or nationalism. It is important to understand that the top leaders of the CCP cannot deal with the Tibet issue in any substantial way and are hence gradually pushing Tibet further along the road to independence.

The final piece by Tsering Shakya is titled “Echoes of the Past: China’s Response to Tibetan Unrest” (2009). He agrees with Wang that the primary responsibility for the 2008 incidents lie with the CCP and the bureaucracy, but they try to deflect the blame to outside forces like the Dalai Lama, the CIA, the CNN, or the West in general. Like all colonising authorities they stigmatize the natives as being inherently violent and hence backward and primitive. Such a view of Tibetans as in need of liberation and civilisation is relatively new and dates to the occupation and conquest of Tibet. Prior to that the Tibetans were looked up to, particularly in the areas of religion and philosophy. Shakya concludes that as long as the Tibetan people’s voice and dignity are denied the reasons for resistance will remain. Progress is possible only if these voices are listened to and devolution of power takes place.

It is not possible to go into all the very important points made by both the authors. But we find in the end that the two authors have arrived at a convergence of views on the issue of Tibet. The importance of dialogue, of listening and valuing the Other’s voice cannot be underestimated for conflict resolution, and Wang is certainly exceptional and exemplary, though certainly not alone, among Han Chinese in his empathetic approach to the ‘minority nationalities’. However, one or two crucial points are missing in this dialogue, which in my opinion might open up even further the path towards the resolution of the national question in China. Tibetans are being used as a scapegoat by the Chinese bureaucrat bourgeoisie also to divert attention from the deepening divides in Chinese society as a result of globalisation, i.e., its integration into the US-led imperialist-capitalist world system. Moreover, Tibet and East Turkestan are being held captive not just for strategic reasons (p. 111), but also because their immense mineral, oil, gas and other wealth is needed for China’s industrialisation. For China to listen to Tibetans’ voices and loosen its hold, it would have to chalk out an alternative development path for itself. In the absence of this, Tibet’s push for independence will, as Wang foresees, certainly get ever stronger.

* PRANJALI BANDHU is founder member of South Asia Study Centre in the Nilgiris, Tamil Nadu. She is author of “The Tibetan Saga for National Liberation.”

The Tibet Factor in India-China Relations

Need of the Hour: A New Theory of Liberation