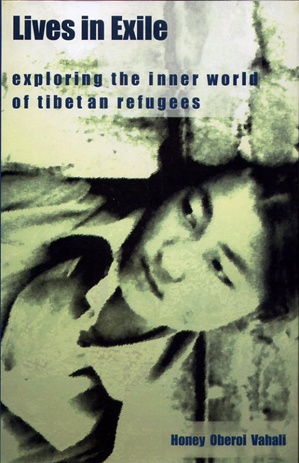 LIVES IN EXILE: EXPLORING THE INNER WORLD OF TIBETAN REFUGEES

“The holocaust that happened in Tibet revealed communist China as a cruel and inhuman executioner—the most brutal and more inhuman than any other communist regime in the world.”(Alexander Solzhenitsyn)

“Lives in Exile” is based on intermittent field work carried out between the years 1996-2007 in the second largest Tibetan settlement in India at Dharmasala in the State of Himachal Pradesh. First completed as a PhD thesis by Dr. Vahali it was worked into book form with the support of a grant from the Nehru Memorial Fund, Teen Murti House, Delhi. Dr. Vahali brings to the work her experience as a practising psychotherapist. Currently she heads the Centre for Psychotherapy and Clinical Research under the School of Human Studies at the Ambedkar University, Delhi.

Honey Oberoi’s interest in issues Tibetan began with early positive encounters with Tibetans in her childhood. Moreover, she has a refugee background due to the Partition of India in 1947, and has been witness to its material and emotional repercussions in her own family. Being socialistically inclined the fact that the Tibetan exile situation has resulted from violent occupation of the country by a power claiming to be communist posed a major theoretical challenge to her idea of communism. Shockingly, the entire Communist stream worldwide failed to question the “peaceful liberation” of Tibet by the Chinese People’s Liberation Army in 1949-50 and by and large seems to have accepted the Chinese government’s perspective on this question. In Honey Oberoi’s opinion, it is the failure to self-reflect on the implications of the use of power that proves to be a major lacuna in Communist theory.

In India, it is not only the mainstream parliamentary Left but also the non-parliamentary far Left that has failed to theoretically deal with this issue. Academic attention paid to the issue of Tibet has been fairly low if we consider that Tibetans constitute a large refugee contingent since quite some time. Though fairly well settled by the Indian and their own exile government, through their own initiatives and intra-community cooperative endeavours, and enjoying substantial Western aid, there are hardly any Tibetan Studies related departments in Indian universities, as far as this reviewer is aware, except in Punjab University and Viswa Bharati, Santiniketan. Refugee/Migration studies share more or less the same fate. In fact, this state of affairs complements one of the suggestions of an interviewee in this book—Jamyang Norbu—that the government-in-exile should set up another Tibetan university in addition to the Central University for Tibetan Studies at Sarnath, which would focus on the concerns of the Tibetans and would enable further development of their own knowledge, language and history.

The aim of Dr. Vahali’s research is not to offer a socio-political analysis of the conversion of Chinese communism into a totalitarian nationalist force, and more recently into a capitalist power bloc, as she says in her Introduction, but given her own training and area of expertise, the work focuses primarily on the psychological aftermath of the Tibetans’ expulsion from their homeland. It is guided by a psychoanalytical/psycho-historical orientation that follows the trajectories of individual life-histories across three generations in a span of four-and-a-half decades and tries to document the omitted and silenced voice of Tibetan refugees. Such engaged research constitutes a force that not only provides insight into the refugees’ trauma but also opens up certain directions regarding how to deal with the present and prepare for meaningful future social action.

Totalitarianism and holism are key concepts in this work.  The new democratic revolution in China led by the Chinese Communist Party finally resulted in the establishment of a totalitarian/fascist regime because of its linear model of change using coercive methods. The revolutionary process refused to allow the complex simultaneous existence of internal polarities; however, it is only the acceptance of the darker aspects of the Self that can lead to holism and a sense of freedom. No Self can attain integrity and cohesiveness and become whole by forgetting/expelling negative inclinations and proclivities, which can make us into potential oppressors, exploiters and victimisers. Social divisions, hierarchies, exploitation based on ethnicity/nationality, gender, race, caste and class are facilitated by a divided Self, which is perpetually creating the “Other” as the enemy to be annihilated.

Leaders emerge from within society for taking the masses on this intolerant, totalising mission by channelling subconscious rage, pain, and humiliation. “We now believe that this Other can only be allowed to exist if it becomes identical and homogenised with the Self… a new collective totality comes into existence—an organisation tightly homogenised, unaccepting even of its inner sub-identities, insecure in its very basis and ruthlessly intolerant of the Other outside.” (p. xli).

The challenge for the tormented Tibetan refugees, who to a great extent come from the “exploiting, feudal, rich class,” is to overcome the victim syndrome and self-critique their feudal past; it lies in not yielding to the counter victimiser within and dehumanising the Chinese en masse as the enemy “Other”. Among the three generations interviewed by Dr. Vahali—the older refugees who came along with the Dalai Lama in 1959, the middle-aged generation of those born or brought up in exile in India, younger people including new arrivals from Tibet and ex-political prisoners or survivors of torture—there are Tibetans who have risen to face this challenge. The Dalai Lama’s counsel to the victims of oppression by the Chinese has helped them in this to no small extent.

It is the author’s success that through her empathetic approach she has been able to get these various sections of an otherwise reserved community to open up and narrate their painful experiences and how they relate to each other and their victimisers, whom they consider as their opponents, and who therefore can easily be ‘othered’ as they themselves have been. The torture techniques employed by Chinese to create the new communist personality out of a feudal religious personality in the case of some Tibetan political prisoners are reminiscent of the use of psychiatric shock therapy in the West to create new personalities with no memory of their past, as graphically described by Naomi Klein in her book, “The Shock Doctrine.”

India being a land with a large number of refugees coming from neighbouring countries this work is a signal contribution to refugee studies. Similar studies of other large displaced refugee communities, such as the Sri Lankan Tamils and the Bangladeshis, would benefit from this approach and educate the Indian public to be more caring and understanding rather than succumbing to totalitarian philosophies and leaders.

Exile and refugee status are symptomatic of our current times. The history of the modern capitalist nation state is simultaneously a history of exiledom and refugeehood because the process of ‘othering’ has been intrinsic to it. Under conditions of globalisation economic migration, political refugeedom and internal displacement have increased exponentially. The dilemma and in a sense trauma of a refugee is that s/he “is a person who does not belong where he stays and who cannot return where he belongs…” (Lhasang Tsering, cited on p. 59). Honey Oberoi, following Erik H. Erikson, interprets exile in psychoanalytical terms as a forsaken fragment of the Self that recurrently keeps manifesting itself as a split in the life of individuals, collectivities, nations and religions, or any other human grouping.

The problem for refugees is the lack of a place they can call home. For Tibetan refugees the statelessness has extended over a pretty long period of time. India, unfortunately, lacks specific laws for the protection of the rights of refugees. The trajectory of development in post-vivisection India has been one of dependent capitalism creating large-scale deprivation and internal and outward migration. Refugees coming into India such as the Tibetans and Bangladeshi Muslims are increasingly faced with the problems of adaptation to host populations that are themselves divided by vested dominant interests along the lines of religious communal and ethnicity based polarisations to divert from actual pressing livelihood issues.  Majoritarian communalism reinforcing casteism and gender inequity—a kind of totalism in the terminology used by Vahali—is getting entrenched. So, as expressed by some of the Tibetan voices in the book, the refugees end up with a feeling of not belonging once again; they feel twice uprooted. The forces at work here need to be comprehensively understood in order to arrive at viable solutions.

Vahali also focuses on another problem facing the exile Tibetans, namely, how to preserve their Tibetanhood. The question of identity arises due to the inability or lack of desire to integrate/assimilate into the host country and its culture; though partial Indianisation and Westernisation too under globalising conditions are inevitable. Among the younger generation many Tibetans are also already quite sinocized by the time they come to Dharamsala. A section of these has begun to accept the deterritorialisation of the notion of Tibet. They ascribe to the nation newer and less static meanings, images and symbols, which are more cultural than political (p. 278). For them, McLeod Ganj becomes Little Lhasa; homeland becomes a fluid constellation of customs, ways and mores. This process of refugee groups becoming less attached to a homeland with fixed territorial borders has affected other multigenerational refugees too, as the Sri Lankan Tamils in Britain. With an increasing trend worldwide of intercultural marriages the offspring grow up blending different cultural identities and make their own choices of what they accept/reject of their host cultures or retain of their own roots. New cross cultural identities are continually being formed.

In the case of Tibetan intermarriages, whether with Westerners or Chinese, which are becoming frequent nowadays, the change in attitude towards national identity among the new generation can be viewed positively or as a loss to the movement of national liberation by the Tibetans. According to the author, such shifts “could have significant ramifications for the future of entire humanity.” (p. 280).

The writer concludes that at the present juncture not only Buddhism, communism and psychoanalysis, but also all other positive currents and thoughts such as Gandhianism, Dalitism and   feminism need to give up their totalistic inclinations and come closer together while seeking a co-existent domain for the creation of an interdependent, egalitarian, self-reflexive and compassionate human identity.

Interested readers should find this a gripping text rich with many insights.

* Pranjali Bandhu is an activist researcher and writer based in the NiIgiris, India. She is author of “Tibetan Saga for National Liberation” and founding member of South Asia Study Centre, Ootacamund. She can be contacted at southasiastudycentre@gmail.com