(TibetanReview.net, Oct04’20) – India has been reporting drop in new Covid-19 cases over the last three days while the maximum daily number reached thus far on Sep 16 remains to be exceeded. The country has also been reporting a general trend of decline in active cases.

The number of samples being tested across the country is roughly the same as second and third week of September, when more than 90,000 cases were getting reported every day. And yet, in the last one week, less than 80,000 new cases have been discovered every day on an average, noted the Indianexpress.com Oct 4.

As a result of this decline in daily numbers, the growth rate has dropped off rapidly in the last few days. As of now, the coronavirus cases in India are growing only at 1.28 per cent per day, the report added.

Four states, namely Maharashtra, Andhra Pradesh, Karnataka, and Tamil Nadu have accumulated more than 610,000 cases each in that order.

Three other states/ Union Territories, namely Jharkhand, Jammu & Kashmir, and Uttarakhand had reported more than 50,000 cases each so far in that order. 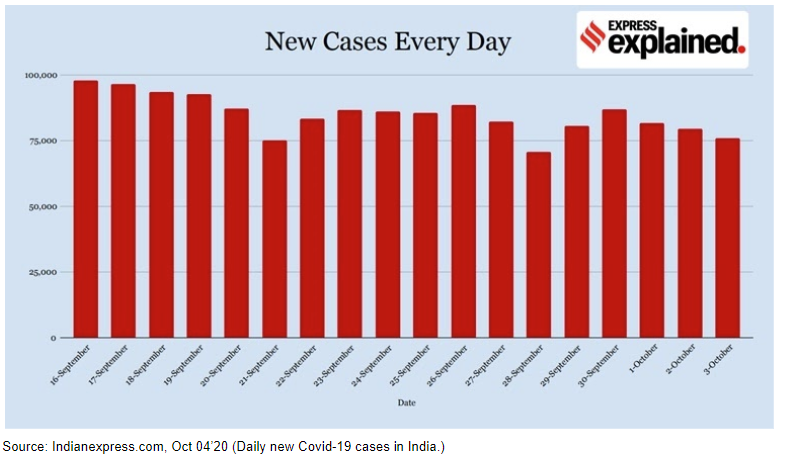 The total number of Covid-19 cases among Tibetans in India, Nepal and Bhutan had remained unchanged in the past two days at 377 (↑0), of whom 166 were active, 198 had recovered and 13 had died, according to the tally of the Central Tibetan Administration (CTA) as of Oct 04.