(TibetanReview.net, Oct09’20) – Almost all states and Union Territories in India are testing more than 140 samples “per day per million population”, the timesofindia.com Oct 9 cited the country’s health ministry as saying, referring to the WHO-prescribed minimum and underlining that higher testing on a sustained basis had aided in bringing down the positivity rate.

Currently, six states and one UT have a less than 5% positivity rate, the report said. The WHO considers this to be the rate below which the pandemic could be brought under control.

Besides, 22 states and one UT are below national average, indicating the rate of infection spread is being contained in many parts. The national average of tests per day per million population stands at 865, the report added.

Sustained drops in the daily numbers of new coronavirus infections had resulted in the active cases in the country dropping below nine lakh now. In the middle of September, there were more than 10.17 lakh active cases, noted the indianexpress.com Oct 9.

However, the outlook is far from rosy. A report submitted by an expert committee set up by the Delhi government has warned that the city should prepare for a daily surge of 15,000 positive cases this winter if festive gatherings are not controlled while respiratory ailments get aggravated during winter months.

“It has been seen that Onam in Kerala and Ganesh Chaturthi in Maharashtra escalated the pandemic seriously. This must not be allowed to happen in Delhi. Our emerging gains in reduction in cases will be reversed because of these festivities and rush in markets and localities,” another timesofindia.com reported Oct 9 quoted the experts as saying.

Four states, namely Maharashtra, Andhra Pradesh, Karnataka, and Tamil Nadu have accumulated more than 640,000 cases each in that order.

Three other states/ Union Territories, namely Jharkhand, Jammu & Kashmir, and Uttarakhand had reported more than 53,000 cases each so far in that order. 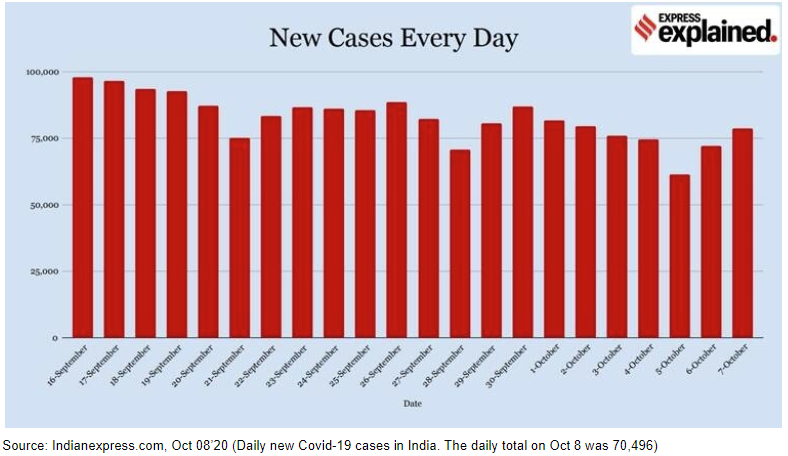 The CTA said Oct 9 that at least 180 cases had been reported in Tibetan community in India and Nepal during this week. They included 8 are from Delhi, 13 from Ladakh, 18 from Hunsur, 3 from Miao, 6 from Bylakuppe, 4 from Tezu, 1 from Dharamshala, 117 from Mundgod, and 10 from Nepal.