(TibetanReview.net, Oct03’20) – The death toll from the novel coronavirus in India crossed the 100,000 mark on Oct 3 morning, three days after the global toll touched 1 million, noted the Indianexpress.com Oct 3. Only the world’s worst hit USA and the second one Brazil have totaled more Covid-19 deaths than India.

Reporting more than 1,000 daily deaths for over a month now, India has of late been contributing between 15 per cent and 25 per cent of global deaths daily. Between 4,000 and 6,000 people have been dying every day globally, the report noted.

Even so, India continues to occupy the top global position with the maximum number of Covid-19 recoveries and accounts for 21 per cent of the recovered cases worldwide, while its share in the total cases stands at 18.6 per cent, the PTI news agency Oct 3 cited the country’s health ministry as saying.

Four states, namely Maharashtra, Andhra Pradesh, Karnataka, and Tamil Nadu have accumulated more than 600,000 cases each in that order.

Two other states/ Union Territories, namely Jharkhand, and Jammu & Kashmir had reported more than 77,000 cases each so far in that order.

Besides, there were seven other states/Union Territories with a total more than 2,000 cases each, namely Nagaland, Meghalaya, Ladakh, Andaman and Nicobar Islands, Sikkim, Dadra and Nagar Haveli, and Mizoram in that order. 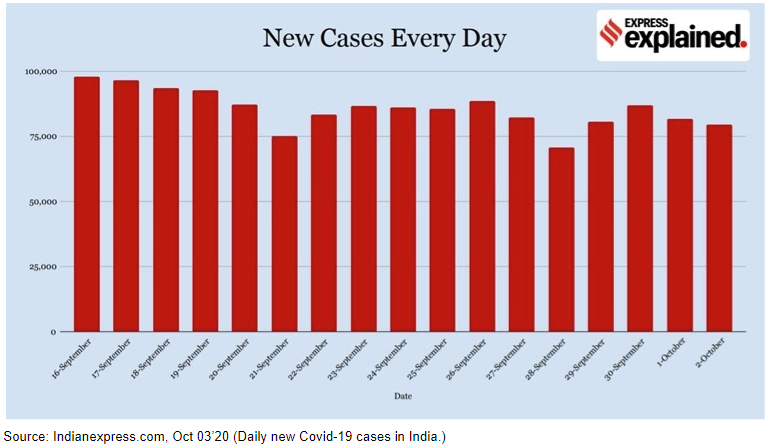 The total number of Covid-19 cases among Tibetans in India, Nepal and Bhutan had remained unchanged in the past 24 hours at 377 (↑0), of whom 166 were active, 198 had recovered and 13 had died, according to the tally of the Central Tibetan Administration (CTA) as of Oct 03.