“India has recorded very high single day recoveries successively during the last 3 days. More than 90,000 #COVID19 patients have been cured and discharged from home/facility isolation and hospitals every single day,” the ministry has tweeted.

Even though India is currently the second-worst-hit nation, it has 19% of the world’s recoveries, the health ministry has said.

India has also seen a sharp drop in new infections. The jump in the recoveries, and the drop in the new detection, has ensured that the active cases in the country have dropped below the one million mark, reported the indianexpress.com Sep 22.

The report noted, however, that this was the result of a sharply reduced number of tests that were carried out on a Sunday (Sep 21). Only about 7.3 lakh samples were tested against the normal of about 11 to 12 lakh samples on other days, it noted.

Nevertheless, Covid-19 recoveries have been showing a steady rise in the last few days, unaffected by the fluctuations in the detection of new cases, the report said.

The jump in the recoveries, and the drop in the new detection, has ensured that the number of active cases in the country has dropped below the one million mark.

Four states, namely Maharashtra, Andhra Pradesh, Tamil Nadu, and Karnataka have accumulated more than 520,000 cases each in that order.

Four other states/ Union Territories, namely Punjab, Chattisgarh, Jharkhand, and Jammu & Kashmir had reported more than 65,000 cases each so far in that order.

Besides, there were nine other states/Union Territories with a total more than 1,600 cases each, namely, Manipur, Arunachal Pradesh, Nagaland, Meghalaya, Ladakh, Andaman and Nicobar Islands, Dadra and Nagar Haveli, Sikkim, and Mizoram in that order. 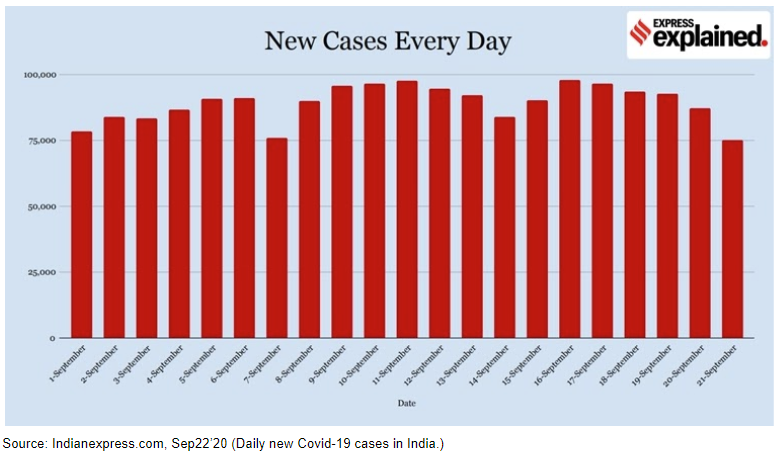 The total number of Covid-19 cases among Tibetans in India, Nepal and Bhutan had remained unchanged at 300 (↑0), of whom 180 were active, 109 had recovered and 11 had died, according to the tally of the Central Tibetan Administration as of Sep 21.