In more recent days, active cases have been falling in most states, including Kerala which, till a few days ago, was the largest contributor of new cases in the country. The only big exceptions right now are Delhi, and, a little surprisingly, Haryana, the report said.

Delhi is in the midst of a big surge, and on Nov 10 it once again reported the maximum number of cases in the country at more than 7,800. For three consecutive days now, Delhi has reported more cases than any other state.

The latest data from India’s Ministry of Health and Family Welfare show that there were 44,281 new cases and 512 new deaths in the country in the past 24 hours as of Nov 11 at 8AM, taking their cumulative totals to 8,636,011 cases and 127,571 deaths. The fresh cases were more than that reported the day before by more than 6,000.

The number of active cases fell below five lakh for the first time after 106 days after remaining below six lakh for 12 consecutive days.

They were followed by six other states with more than 204,000 cases each and which included, Odisha, Telangana, Bihar, Rajasthan, Assam, and Chattisgarh in that order.

Two other states/ Union Territories, namely Jammu & Kashmir, and Uttarakhand had reported more than 66,000 cases each so far in that order. 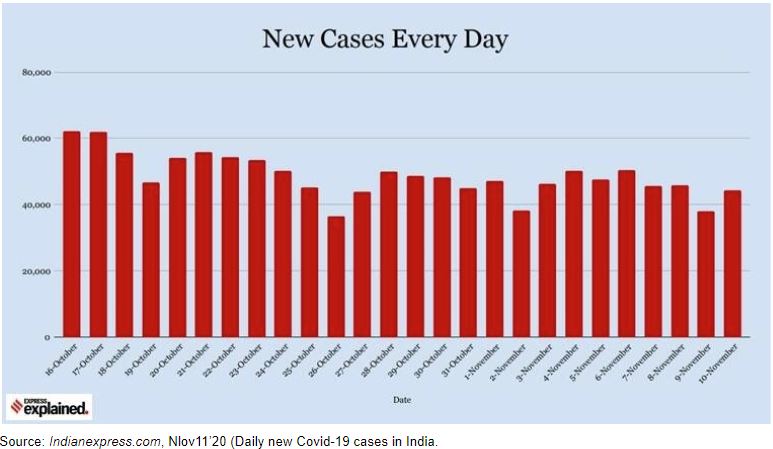 The total number of Covid-19 cases among Tibetans in India, Nepal and Bhutan had remained unchanged at 1,132 (↑0), of whom 431 were active, 678 had recovered and 23 (↑0) had died, according to the latest tally of the Central Tibetan Administration (CTA) as of Nov 11.