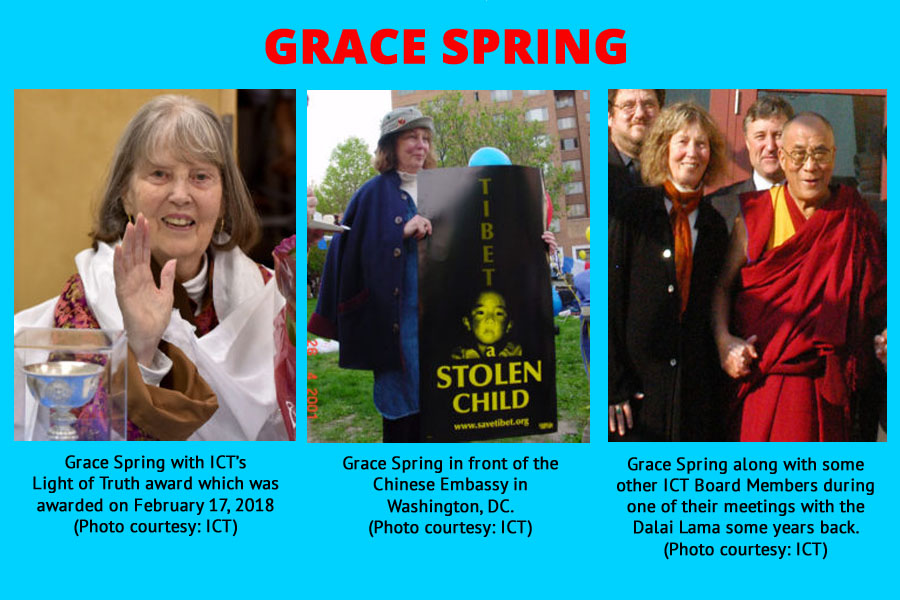 (TibetanReview.net, Apr01, 2018) – A woman who had for more than 18 years staged a solitary weekly protest outside the Chinese Embassy in Washington, DC, armed with a Tibetan national flag and a placard drawing attention to the Tibetan issue, has passed away on Mar 29. Grace Spring, an artist, was suffering from Alzheimer’s.

Since 1988 Grace Spring had held a solo vigil every Friday morning in front of the Chinese Embassy in the US capital with a Tibetan national flag and a placard, drawing attention to the plight of the Tibetan people.

In an interview with the Washington Post in Dec 1989, Grace had said she initiated the vigil after the Chinese Government’s clampdown on demonstrators in Tibet in 1987. “I asked myself what is possible for me to do as an American, just by myself,” Spring has told the newspaper. “It only takes one witness. I stand there, carrying the Tibetan flag and a sign.”

Writing about her commitment to the cause, the Deseret News said in a Nov 6, 1997 report headlined “Rain or shine, Tibet vigil carries on”, “Every Friday, Grace Spring gets up and drives to the Chinese Embassy to hold a silent vigil. For 10 years now, she has been waging a one-woman protest against China’s hard-line rule in Tibet. Thousands of motorists drive by as Spring stands there, clutching her Tibetan flag. It rains. It snows. She hopes her persistence will encourage others to take an interest in her cause.”

Washington-based The International Campaign for Tibet (ICT), of which she was a board member, honoured Grace with a special Light of Truth Award on the Tibetan New Year day this year which fell on Feb 17.

Grace had also founded an organization for Tibet in Washington, DC, and served as a regional director of the US Tibet Committee.

A resident of Washington, DC, for many years, Grace relocated, in early 2017, to Middlebury in Vermont, close to where her daughter Cassandra Corcoran resided. ICT cited Corcoran as saying that in the period before her passing away, Grace was in an incredibly happy mood.