(TibetanReview.net, Aug15’20) – Mizoram is now the only state in India with less than 1,000 Covid-19 cases after 48 new infections were reported in Sikkim to take its total to 1,080. Only Lakshadweep continues to remain Coronavirus-free.

Compared to their population sizes, several smaller states have been carrying large caseloads, noted the indianexpress.com Aug 15. Ladakh, Goa, Andaman and Nicobar Islands, and, Daman and Diu have more number of people infected per million population than even Maharashtra, the worst hit state, it added.

Besides, there are 11 other states/Union Territories with a total more than 1,000 cases each, namely Puducherry, Tripura, Manipur, Himachal Pradesh, Nagaland, Arunachal Pradesh, Andaman and Nicobar Islands, Chandigarh, Ladakh, Dadra and Nagar Haveli, Meghalaya, and Sikkim in that order. 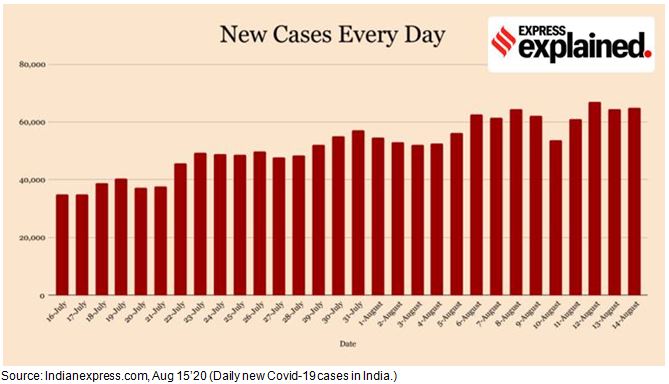 The total number of Covid-19 cases among Tibetans in India, Nepal and Bhutan stood unchanged at a total of 88 (↑0) so far, of whom 20 were active, 66 had recovered and two had died, according to the tally of the Central Tibetan Administration as of Aug 15 morning.