(TibetanReview.net, Oct25’20) – Grim data highlighted the struggle for authorities around the world to bring the coronavirus pandemic under control Oct 24, as the US reported 80,000 infections in a single day, France extended a curfew to two-thirds of citizens and Germany’s death toll passed 10,000, reported the timesofindia.com Oct 24. The report noted that the World Health Organization had earlier warned of an “exponential” rise in infections threatening health systems’ ability to cope.

In India, however, deaths from the Covid-19 infections fell to 580 on Oct 24, the lowest single-day toll from the virus in 98 days, as the pandemic continued to slow down in most parts of the country, reported the timesofindia.com Oct 25.

The country had last recorded a lower daily death count on Jul 18 while the average daily death toll this week has fallen to half the numbers reported during the pandemic’s peak in the country in mid-September, the report noted.

The fall in fresh cases too continues. There were 51,023 new infections reported on Oct 24, the lowest so far this week (except on Monday, when cases fall sharply for other reasons).

Still, few states continue to report high numbers of new cases. While Kerala again reported the highest count of fresh cases in the country at 8,253, a slight drop from Oct 23 figure of 8,511, Delhi reported 4,116 cases, the highest count since Sep18. The pandemic also continued to rage in Bengal, which reported 4,148 new infections, close to its peak of 4,157 logged on Oct 22, the report added.

Still, the current numbers in India are almost half of the peak that was achieved in the third week of September, and declining steadily. And the profile of main contributing states has also changed, noted the indianexpress.com Oct 25.

They were followed by seven other states with more than 203,000 cases each and included, Kerala, Delhi, West Bengal, Odisha, Telangana, Bihar, and Assam in that order.

Six other states, namely Rajasthan, Chattisgarh, Madhya Pradesh, Gujarat, Haryana, and Punjab had reported more than 130,000 cases each so far in that order. 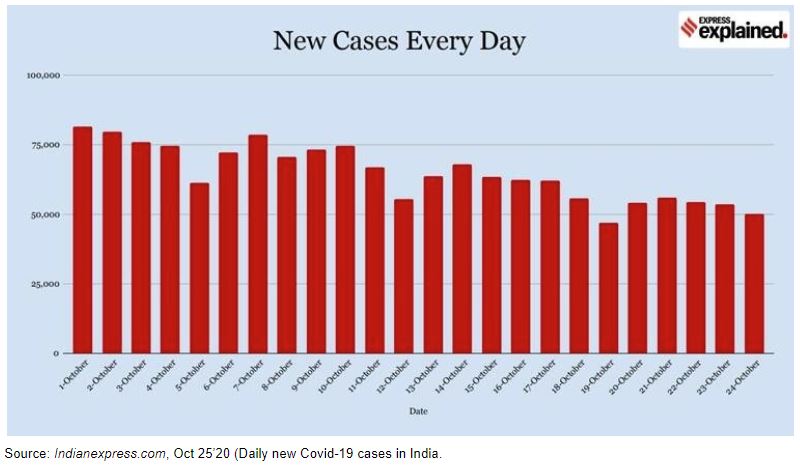 The total number of Covid-19 cases among Tibetans in India, Nepal and Bhutan had remained unchanged at 825 (↑0), of whom 428 were active, 376 had recovered and 21 (↑0) had died, according to the tally of the Central Tibetan Administration (CTA) as of Oct 25.