(TibetanReview.net, Oct27’20) – The United States, Russia, France and many other countries are setting records for coronavirus infections as a tidal wave of cases washes over parts of the Northern Hemisphere, forcing some countries to impose new curbs, reported Reuters Oct 27. India, however, reported its lowest daily caseload in more than three months on Oct 27 morning with less than 36,500 daily new cases.

In Europe, the picture was unrelentingly grim as a string of countries reported record increases, led by France, which posted more than 50,000 daily cases for the first time on Oct 25, said the Reuters report. And the United States has once again been reporting much more daily new cases than India.

They were followed by seven other states with more than 204,000 cases each and included Kerala, Delhi, West Bengal, Odisha, Telangana, Bihar, and Assam in that order.

Six other states, namely Rajasthan, Chattisgarh, Madhya Pradesh, Gujarat, Haryana, and Punjab had reported more than 131,000 cases each so far in that order.

Besides, there were seven other states/Union Territories with a total of more than 2,500 cases each, namely Meghalaya, Nagaland, Ladakh, Andaman and Nicobar Islands, Sikkim, Dadra and Nagar Haveli, and Mizoram in that order. 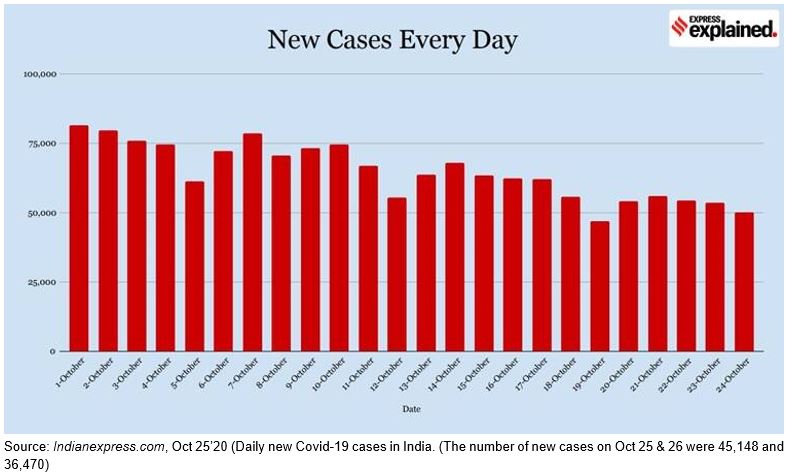